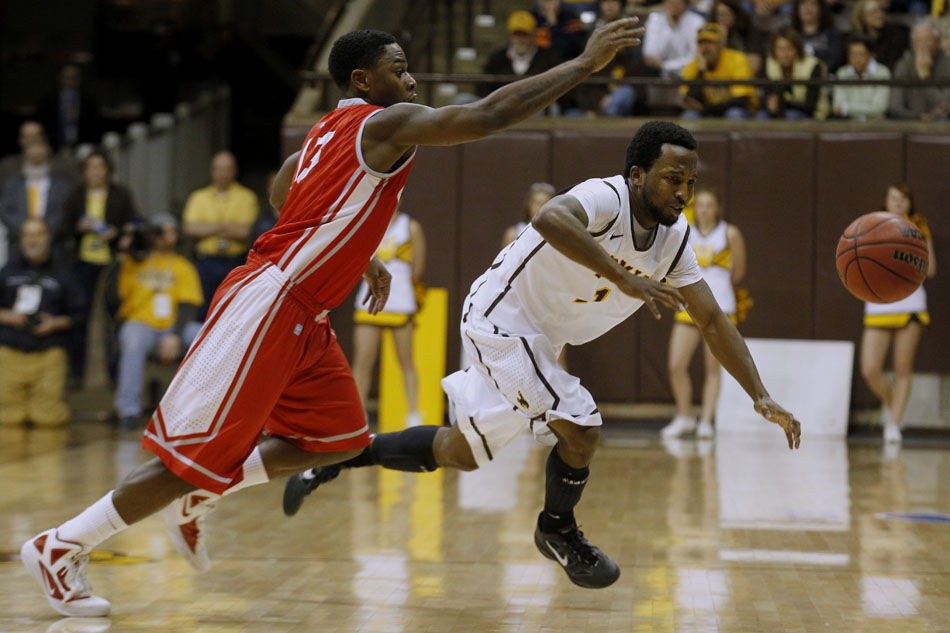 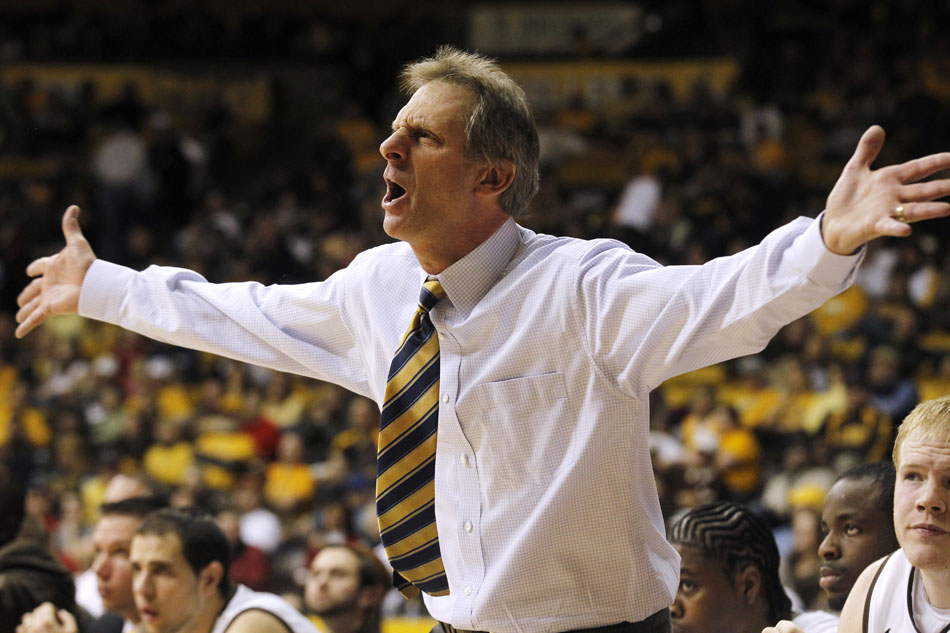 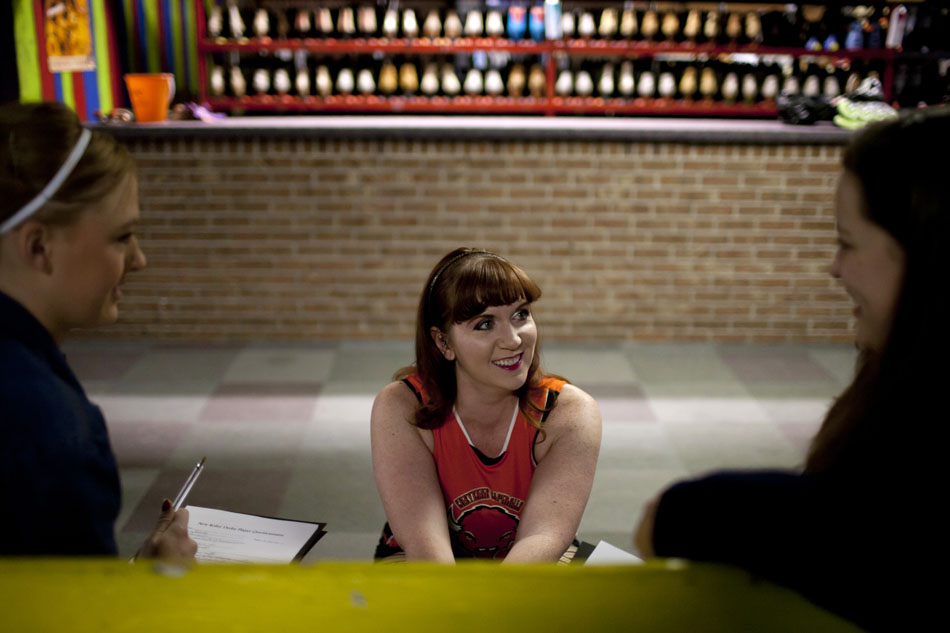 Laura Riley, also known as "Concealed Carrie," shares a laugh as she talks with a couple potential recruits for the Cheyenne Capidolls roller derby team on Tuesday, Jan. 10, 2012, at Roller City. The team held a recruitment call-out for potential members. The team's first match of the year is on Feb. 11. (James Brosher/Wyoming Tribune Eagle)

Firefighters make a splash and a rainbow

Last week I was out trolling (driving around town looking for a feature photo) when I happened to come across a group of Cheyenne firefighters using a ladder truck to fire water into an empty parking lot at Frontier Park. At first, I thought I might have found a fire, but when I got closer I realized they were just training. I shot a few frames of the firefighters by the truck then braved getting down range of their stream (in 30-degree weather) to get a bit of the rainbow they were creating in the frame. I got wet, but it was worth it. 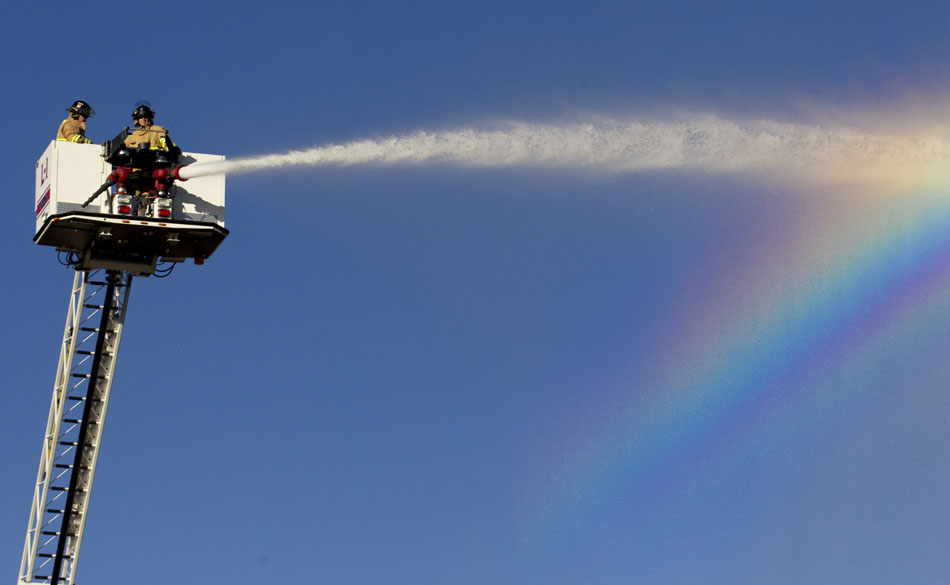 Cheyenne fire fighters Brent Osborne, left, and Jacob Vassar fire a spray of water into the Frontier Park parking lot on Friday, Jan. 6, 2012, in Cheyenne. Members of ladder one and engine one were training Vassar, a new fire fighter who recently joined the department after graduating from the training academy in December. (James Brosher/Wyoming Tribune Eagle) 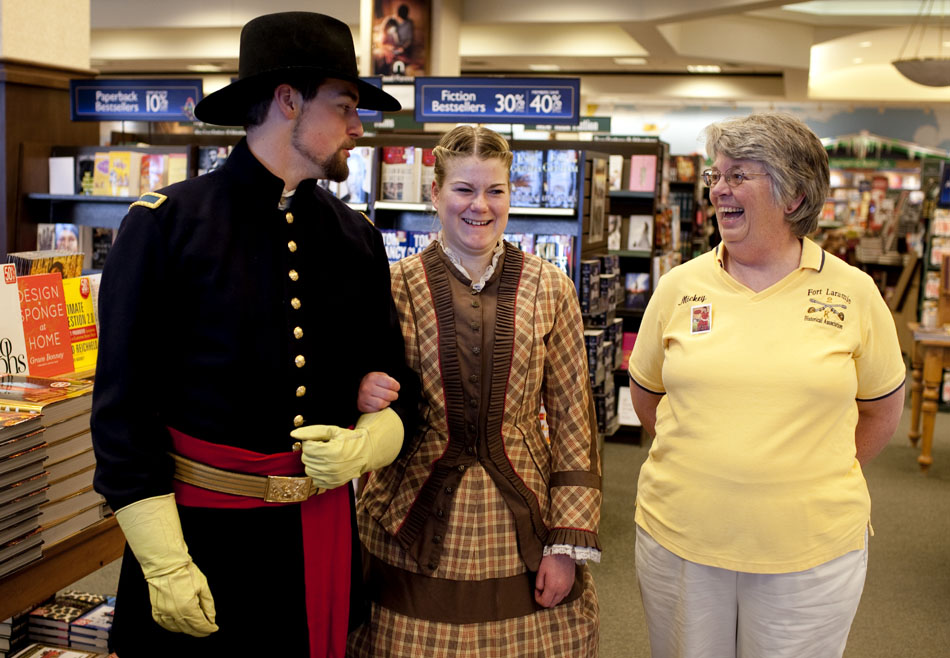 Mickey Lewis, right, a member of the Fort Laramie Historical Association, shars a laugh with Hannah Buettner and Brandon Lewis on Saturday, Jan. 7, 2012, at the Barnes and Noble in Cheyenne. The two were depicting main characters, Lt. Ethan Bowles and Abigail Harding, from Amanda Cabot's new book, "Summer of Promise," during a book signing at the store. The book is set in Fort Laramie, Wyo. in 1885. (James Brosher/Wyoming Tribune Eagle)

Wanted to wish everyone a somewhat belated Happy New Year. The new year of 2012 is finally upon us. Also, I wanted to say thanks to everyone who reads this blog thing of mine on a regular basis. I really appreciate the feedback and encouragement. The past year has been interesting, but I’m very much looking forward to 2012. I have a feeling it’s going to be a good year. 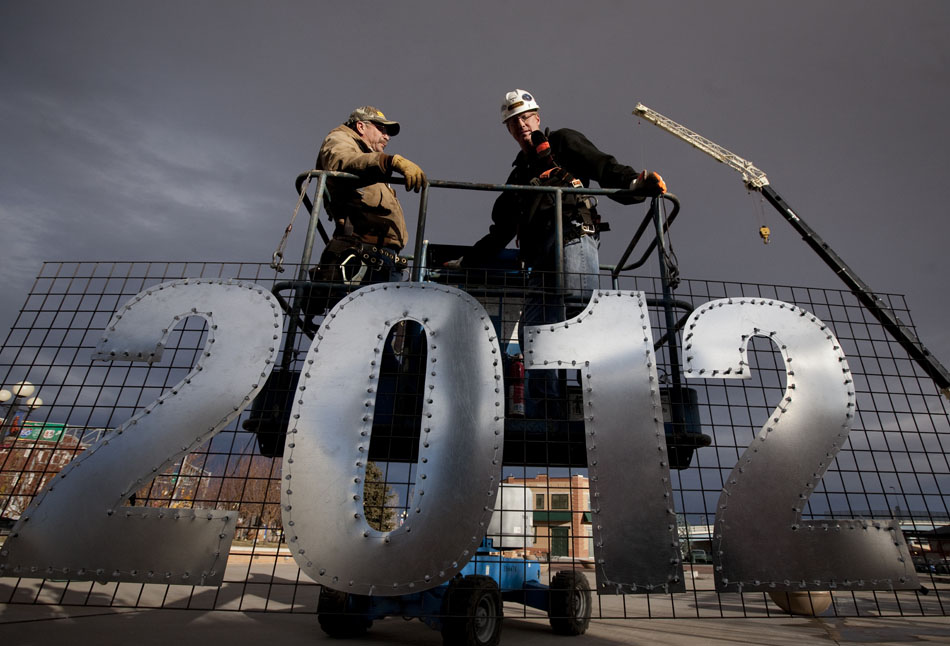 Blake Wilson, right, president of C.H. Yarber Construction, and Paul Bartow prepare to hang a lighted 2012 sign on Friday, Dec. 30, 2011, from the arch entry to the Cheyenne Depot Plaza in preparation for a ball drop on New Year's Eve. The ball will drop from approximately seven stories high during the count down to midnight on Saturday. (James Brosher/Wyoming Tribune Eagle)

Blowing in the wind

It’s been a little windy the past couple of days. And by a little, I mean we had wind gusts reported at 90 mph on Thursday. Welcome to Wyoming.

Motorists proceed cautiously past two overturned tractor trailers that were blown over by high winds on Thursday, Dec. 29, 2011, in the southbound lane of Interstate 25 just south of the High Plains interchange near Cheyenne. Wind blew over the tractor trailer pictured at right around midday on Wednesday followed by a similar incident that toppled the tractor trailer pictured in the background sometime on Thursday morning. For the second day in a row, road signs on the interstate indicated a light trailer restriction for high profile vehicles between the Colorado state line and Cheyenne due to wind gusts higher than 65 mph. (James Brosher/Wyoming Tribune Eagle) 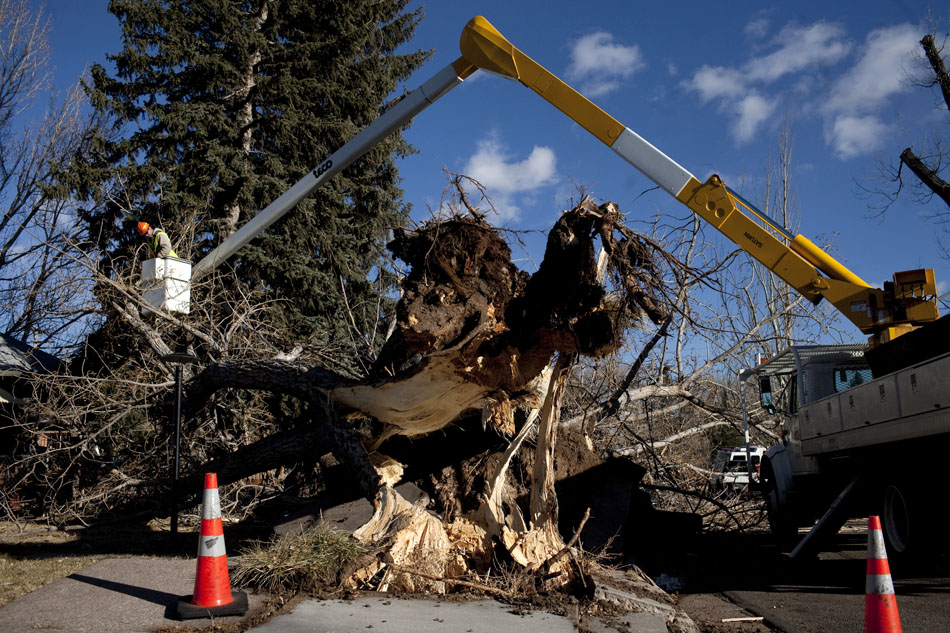 Ed Cullen, a City of Cheyenne Department of Urban Forestry employee, surveys a downed tree on Thursday, Dec. 29, 2011, in front of 1206 and 1208 Cosgriff Court in Cheyenne. High winds toppled the tree onto a car. (James Brosher/Wyoming Tribune Eagle)

A snowman for 27 cents 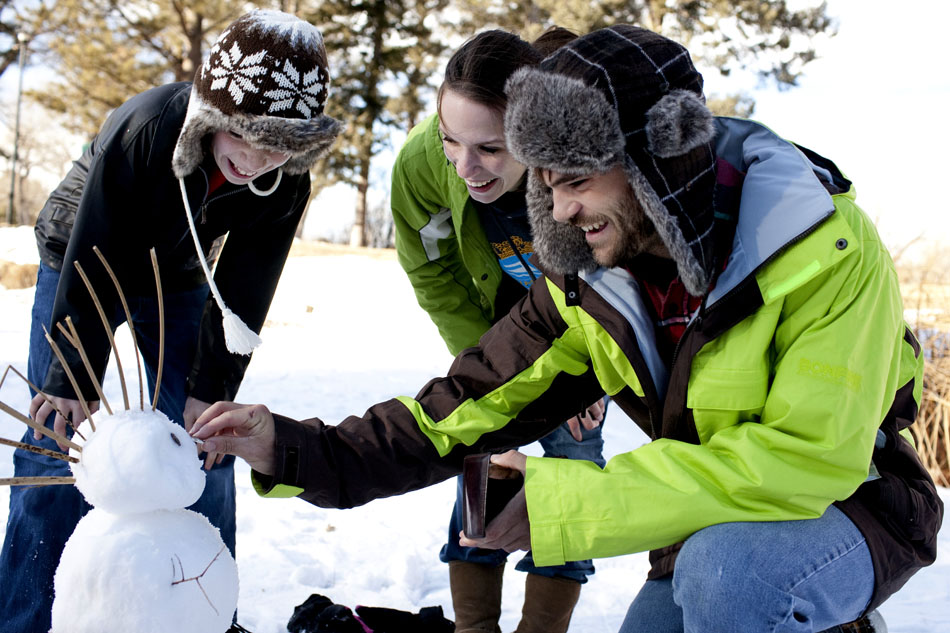 Joe Melia, left, Julia Melia and Stephen Saxer put the finishing touches on a snowman complete with a Mohawk on Tuesday, Dec. 27, 2011, on a frozen pond in Lion's Park. The snowman cost a total of 27 cents to construct: two pennies for the eyes and a quarter for the nose. (James Brosher/Wyoming Tribune Eagle)

One thing that I noticed in my sports pictures this year in comparison to years past was how tight I shot everything. Through college and my internships, I usually shot sports with a 300 mm lens on a full-frame camera, and now I’m shooting sports with a 400 mm lens on a crop-body camera. For example, the second image below is not cropped. Equipment along with the fact that our paper encourages us to shoot large faces contributed to the change in my sports pictures. Here are my 10 favorite sports pictures from this year: 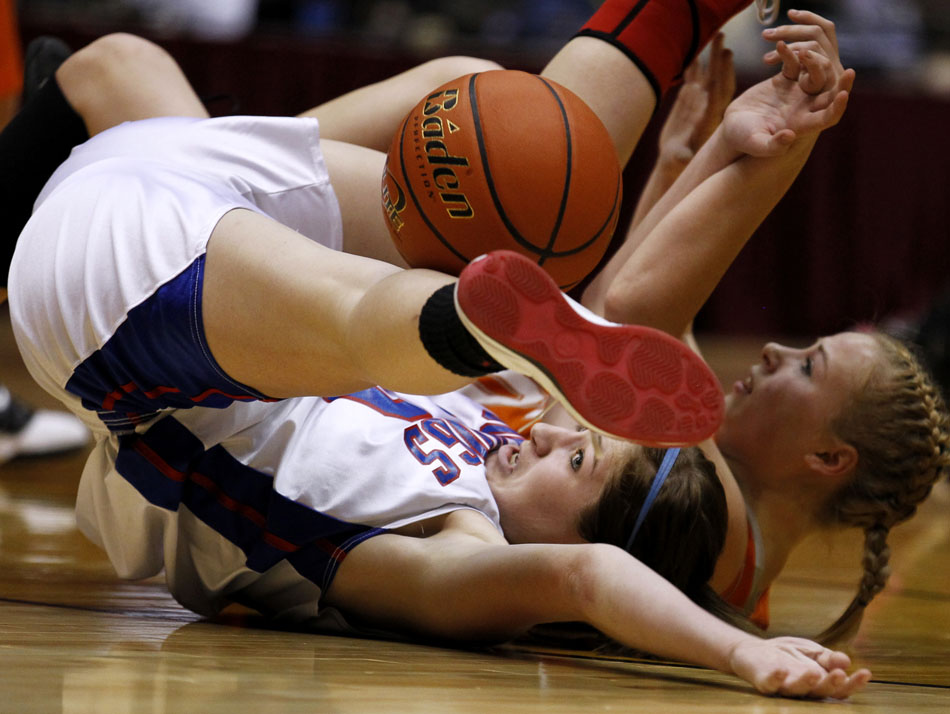 Lovell's Karen Koritnik watches as the ball bounces away from her as she falls to the floor with Burns' Becca Miller during the Class 2A championship game on Saturday, March 5, 2011, in Casper, Wyo. (James Brosher/Wyoming Tribune Eagle) 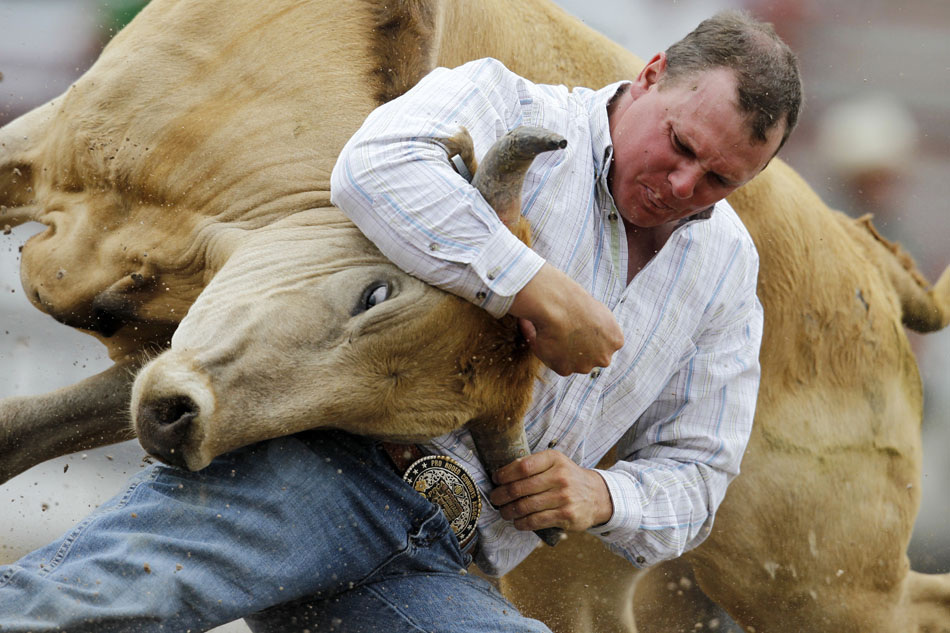 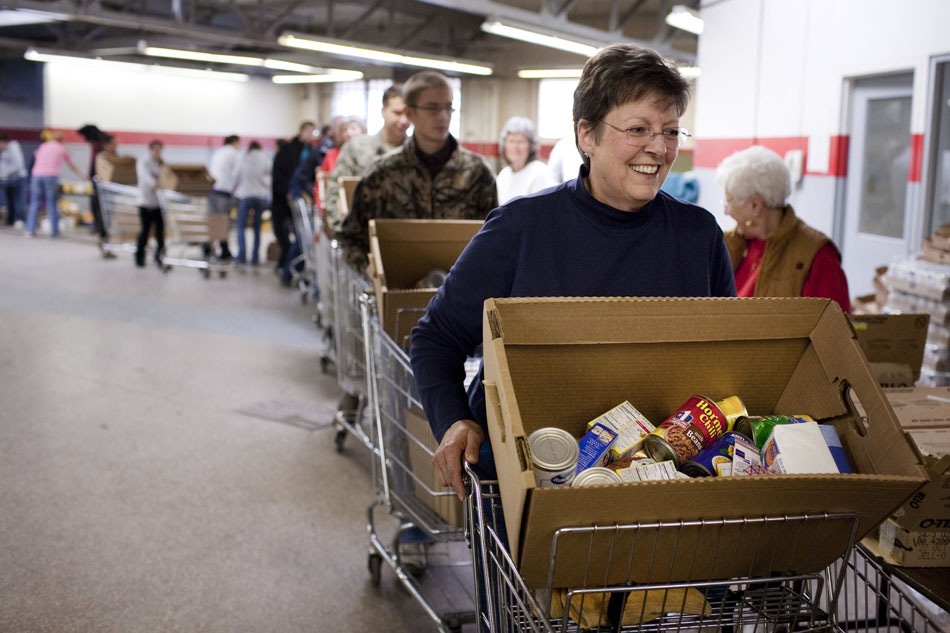 Debby Phillips pushes a cart as she and several other volunteers help assemble Christmas baskets on Tuesday, Dec. 20, 2011, in downtown Cheyenne. Volunteers were assembling some 1,310 baskets for the Laramie County Christmas Program. (James Brosher/Wyoming Tribune Eagle)

For the past few months, I have been working on a picture story about Isaac Salas. As Isaac practiced a forward roll before a high school wrestling practice on Nov. 17, 2010, he broke his C1 and C2 vertebrae leaving him paralyzed from the neck down and dependent on a ventilator to breathe. In the months that followed, Isaac made progress in his recovery eventually regaining limited movement in his arms and legs and the ability to breathe without a ventilator. As he underwent physical therapy and several operations at Craig Hospital south of Denver, Isaac became a celebrity of sorts in Cheyenne. People around the community organized several fundraisers to help Isaac’s family as he recovered. Isaac returned home on Aug. 4. Less than a month later, he died after a procedure to pulverize urinary tract stones blocking his catheter. He was 16.

In my short career, this was the most difficult picture story to photograph. As I got to know him, I was amazed by Isaac’s perseverance and determination despite the physical and emotional adversity he faced on a daily basis after his accident. He would always say “when I walk again” instead of “if I walk again.”

My favorite memory of Salas was on June 3 when I photographed him on a hospital field trip to Bear Creek Lake Park near Denver. As Salas rolled down a beach area near one of the park’s lakes, he teased Jenniy Peltier, his favorite therapist from the hospital, and tried to get her to help him cruise for chicks. Despite his situation, he was in incredibly high spirits. It’s something his mother, Melissa Plumley, called “Isaac being Isaac.” It was inspiring to see and to photograph. 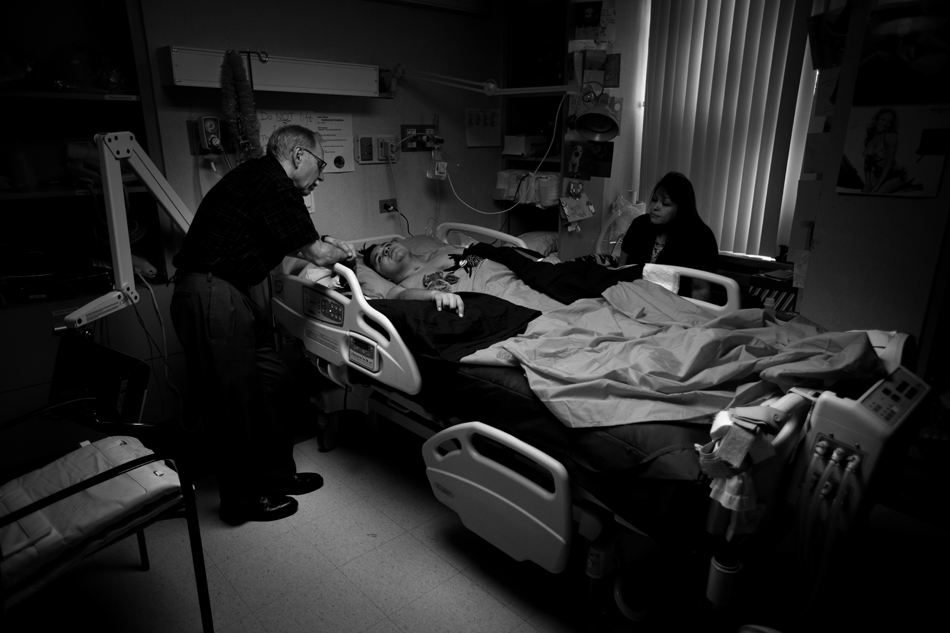 Lester Butt, Isaac Salas' psychologist, leans in to chat with Isaac after a round of physical therapy as Isaac's mother, Melissa Plumley, watches from a chair near the window in his room on Thursday, April 28, 2011, at Craig Hospital in Englewood, Colo. Isaac was hospitalized from November 2010 until August 2011 as he recovered from a break of his C1 and C2 vertebrae in a Cheyenne South High School wrestling practice. (James Brosher/Wyoming Tribune Eagle) 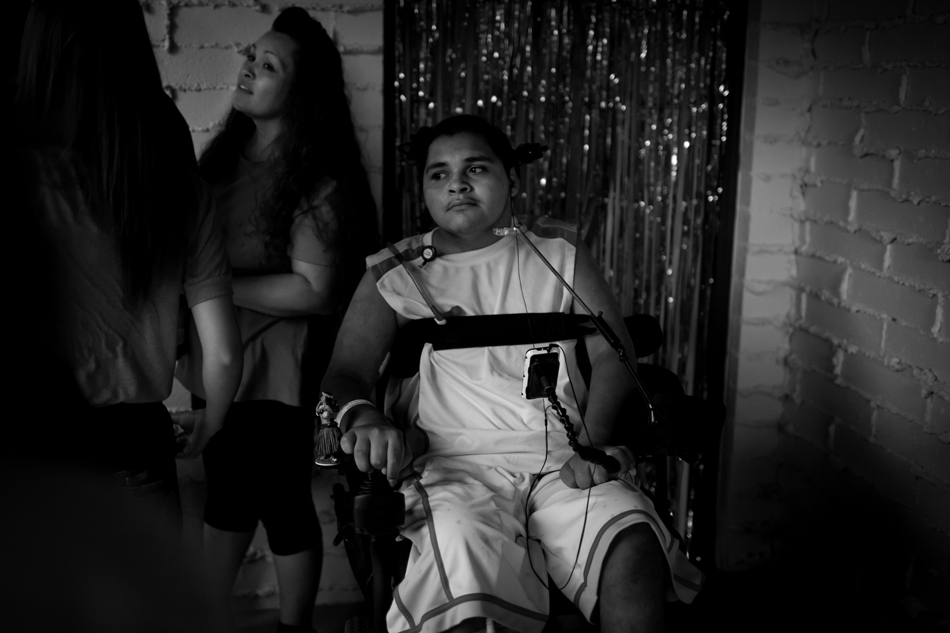 Isaac Salas waits to be helped inside of his family's home as his mother, Melissa Plumley, background, talks with friends and family during a welcome home gathering on Thursday, Aug. 4, 2011, in north Cheyenne. It was the first time Isaac had returned home since the accident in wrestling practice on Nov. 17, 2010. After his injury, his family was forced to buy a wheelchair-friendly home for Isaac, who continued to be wheelchair-bound throughout his recovery until his death on Sept 3. (James Brosher/Wyoming Tribune Eagle)