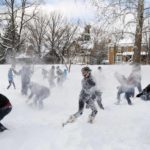 Students battle in a snow ball fight on Wednesday, Jan. 28, 2009, in Dunn Meadow on the Indiana University campus in Bloomington, Ind. The university canceled classes Wednesday due to snow for the first time since 1996, and Monroe County declared a state of emergency. (James Brosher/Indiana Daily Student) 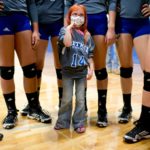 Lily Strang, 6, listens as Bethel volleyball coach Kevin Ulmer talks to his players before a volleyball match against Grace College on Friday, Sept. 20, 2013, at Bethel College in Mishawaka. Strang, who suffers from Fanconi Anemia, signed a letter-of-intent to become a Bethel Pilot and was issued jersey No. 14 thanks to Team IMPACT, an organization that pairs children with serious chronic illnesses with college teams. On this night, the college collected donations in place of admission fees for Strang as part of a send-off. Strang is set to undergo a bone marrow transplant followed by a long isolation period. (James Brosher/South Bend Tribune) 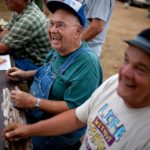 Bus Kelver, left, of Osceola, reminisces with fellow members of the Mishawaka Horseshoe Pitching Club including Gene Ingle of Edwardsburg, Mich., on Wednesday, July 18, 2012, at Bendix Park in Mishawaka. A group of lively old-timers gather at the park every Wednesday to toss horseshoes and engage in some friendly trash talking. (James Brosher/South Bend Tribune) 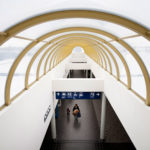 A woman and child make their way past airline check in counters on Wednesday, March 6, 2013, at the South Bend Regional Airport. (James Brosher/South Bend Tribune) 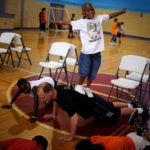 Larenz Dempz, age 7, tries to keep his balance as he stands on Brian Beavliev’s back during a push up at a Police Activities League Basketball camp on Wednesday, June 16, 2010, at the East Boys and Girls Club in Austin, Texas. The PAL camp, part of a new community outreach program, aims to support at-risk youth. (James Brosher/Austin American-Statesman) 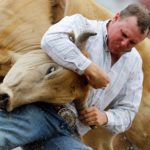 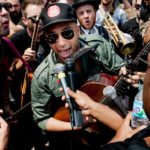 Tom Morello, the former Rage Against the Machine guitarist, performs during a NATO Summit Protest on Sunday, May 20, 2012, at Grant Park in Chicago. Despite pleas from organizers, Morello insisted on performing amidst a large group of people in the middle of the park. (Photo by James Brosher) 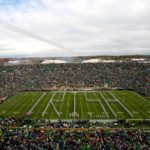 A formation of six F/A-18 Hornets from the Blue Angels, the U.S. Navy’s Flight Demonstration Squadron, fly over Notre Dame Stadium as the Band of the Fighting Irish spells out “Irish” on the field before a game against Navy on Saturday, Nov. 2, 2013, at Notre Dame. The squadron did a flyover from the south before turning and flying over the stadium a second time, pictured, as they flew to the South Bend Regional Airport. (James Brosher/South Bend Tribune) 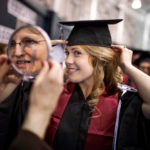 Kelsey Cramer carefully adjusts her cap with some help from Brenda Bickel, a member of the school’s General Studies alumni board, reflected in mirror, before the Indiana University-South Bend commencement exercises on Tuesday, May 8, 2012, in the Purcell Pavilion at Notre Dame. (James Brosher/South Bend Tribune) 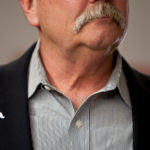 John Gregg, a former Indiana House speaker, watches the proceedings during Dyngus Day on April 9, 2012, at the West Side Democratic Club in South Bend. Gregg, who uses his distinctive mustache as a campaign logo, is hoping to become the first Indiana governor with a mustache since Samuel Moffett Ralston served from 1913 to 1917. (James Brosher/South Bend Tribune) 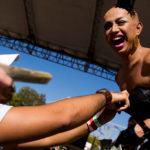 Ongina, a male drag queen, reacts as a man stuffs money down his bra during a drag performance of Lady Gaga’s “Bad Romance” on Sunday, Sept. 12, 2010, at the Peoria Pride Festival on the Riverfront in Peoria, Ill. The festival featured drag performances, food and vendors catering to the GLBT community. (James Brosher/Peoria Journal Star) 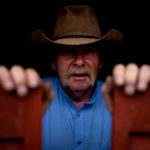 Cheyenne Gunslinger Dave Tea Burton, also known as “Crockett,” poses for a portrait on the Gunslinger’s stage on Wednesday, July 27, 2011, in downtown Cheyenne. “I’ve wore one since I was 14,” the native of South London, England said of his cowboy outfit. (James Brosher/Wyoming Tribune Eagle) 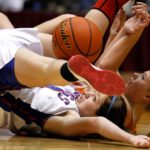 Lovell’s Karen Koritnik watches as the ball bounces away from her as she falls to the floor with Burns’ Becca Miller during the Class 2A championship game on Saturday, March 5, 2011, in Casper, Wyo. Lovell won the state title with a 60-56 victory against Burns. (James Brosher/Wyoming Tribune Eagle) 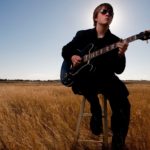 Taylor Scott, the 18-year-old guitarist and vocalist for the Cheyenne-based blues band Another Kind of Magick, poses for a portrait with his Gibson Custom ES 345 guitar on Friday, Sept. 30, 2011, in Cheyenne. Scott, who owns 12 guitars, is set to record a live album with his group on Nov. 11 at The Plains Hotel in downtown Cheyenne. (James Brosher/Wyoming Tribune Eagle) 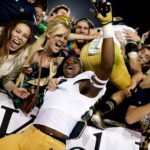 Notre Dame wide receiver Justin Ferguson, center, celebrates with teammates in the Irish fan section after a 22-13 win against USC on Saturday, Nov. 24, 2012, at the Los Angeles Memorial Coliseum. The win capped off an undefeated regular season for the Irish, propelling them to a berth in the BCS National Championship Game. (James Brosher/South Bend Tribune) 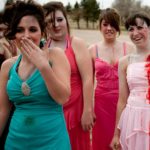 Cheyenne East students share a laugh before climbing into wrecked vehicles to portray victims at the scene of a fatal accident for a drunken driving crash demonstration on Tuesday, April 12, 2011, at Okie Blanchard Stadium in Cheyenne, Wyo. The demonstration coincides with East’s prom on Saturday. (James Brosher/Wyoming Tribune Eagle) 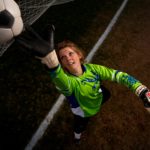 Cheyenne Central keeper Kelley Fisher reaches back to bat a ball over the crossbar as she poses for a portrait on Monday, April 25, 2011, at the school in Cheyenne, Wyo. (James Brosher/Wyoming Tribune Eagle) 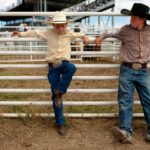 Jack Osborn, left, 10, and Brayden Wiesen, 11, take a break towards the end of the day inside of a chute during the first go of slack tie-down roping on Wednesday, July 20, 2011, at Frontier Park. Several youngsters including the two funneled cattle into chute 9 from 8 a.m. to about noon for slack tie-down roping. (James Brosher/Wyoming Tribune Eagle) 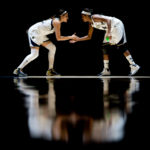 Notre Dame’s Natalie Achonwa, left, slaps hands with teammate Ariel Braker as the starting lineup is introduced before a women’s NCAA college basketball against DePaul on Tuesday, Nov. 26, 2013, at the Purcell Pavilion at Notre Dame. The No. 5 Irish defeated No. 25 DePaul 92-76. (James Brosher/South Bend Tribune) 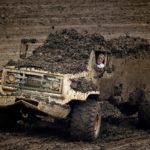 Jim Patterson looks out his driver side window to see as he uses a truck to mash down mud on the track on Saturday, Sept. 18, 2010, at Peoria Speedway in Peoria, Ill. Rain throughout the day made the track too sloppy for racing, forcing some drivers to use their pick ups to help dry and smooth out the track. (James Brosher/Peoria Journal Star)