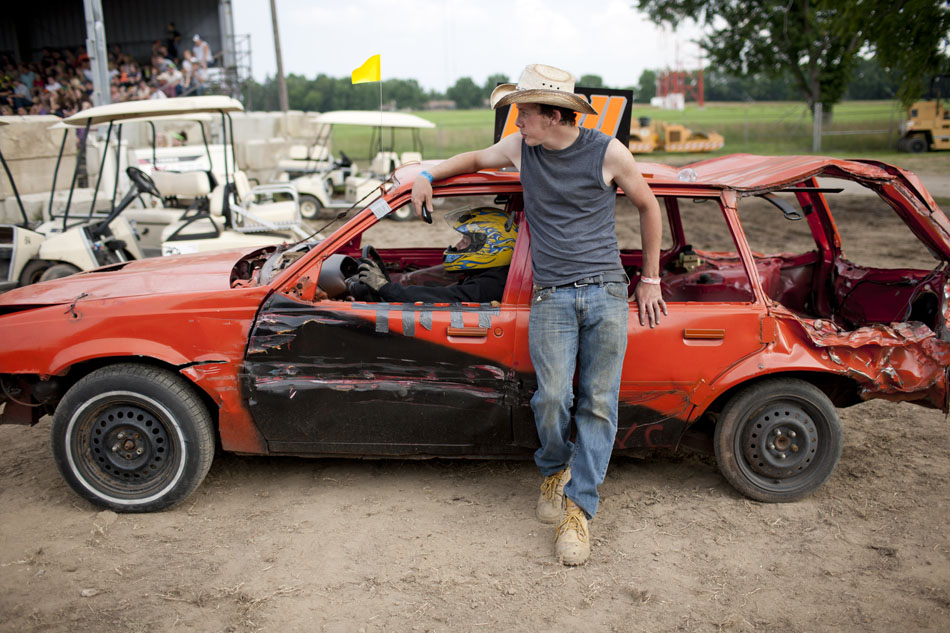 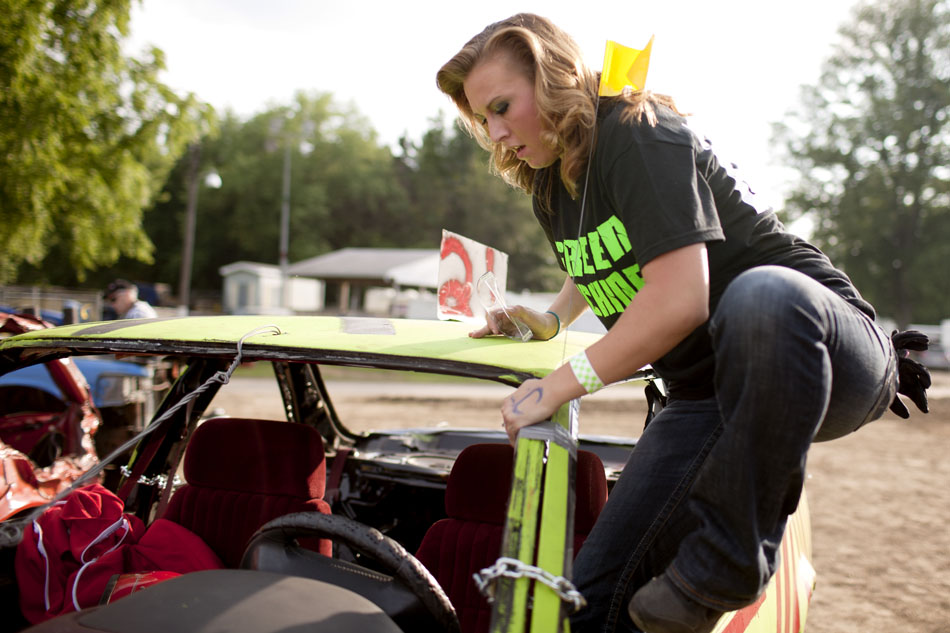 I spent Saturday evening at Plymouth Speedway waiting for Tony Stewart. Stewart, the defending NASCAR Spring Cup champion, was slated to race sprint cars on the track’s dirt inner oval after taking a helicopter from Michigan International Speedway where he was practicing for a cup race the next day. When Stewart finally arrived just before 10 p.m., he walked into this team’s hauler just as a thunderstorm rolled across the speedway. The night’s races were cancelled and Stewart never got in his car. The first frame sums up his evening well. 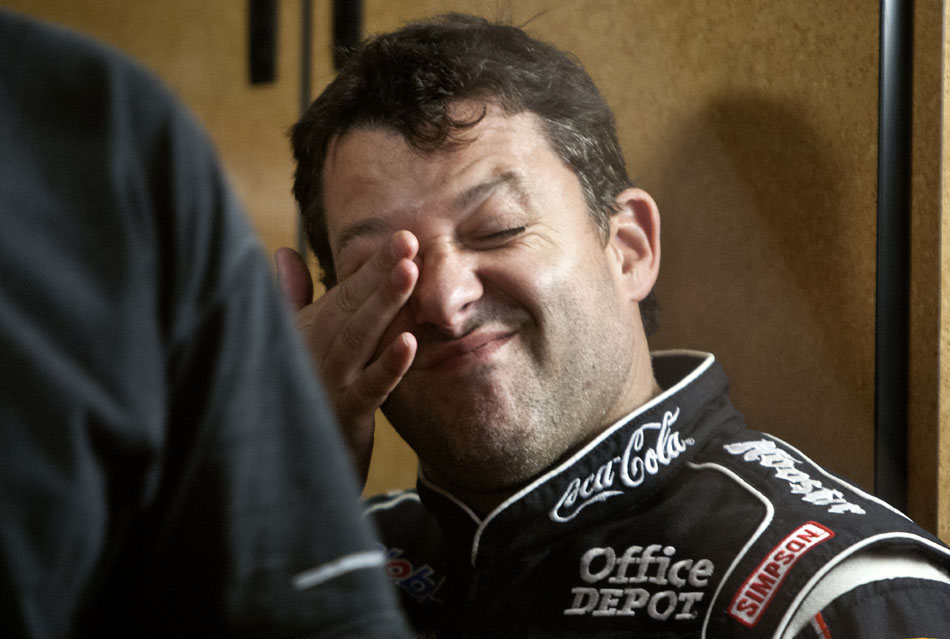 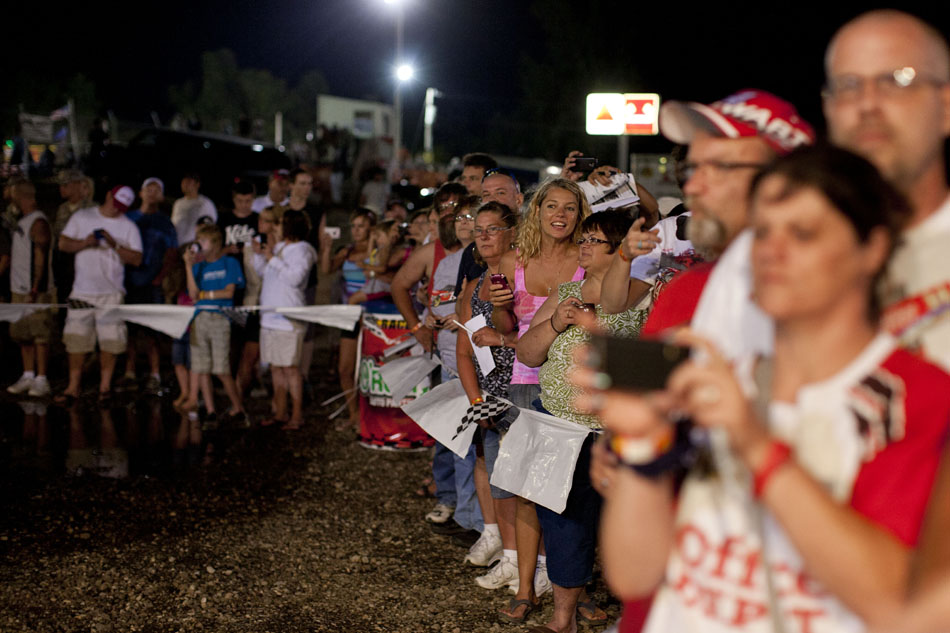 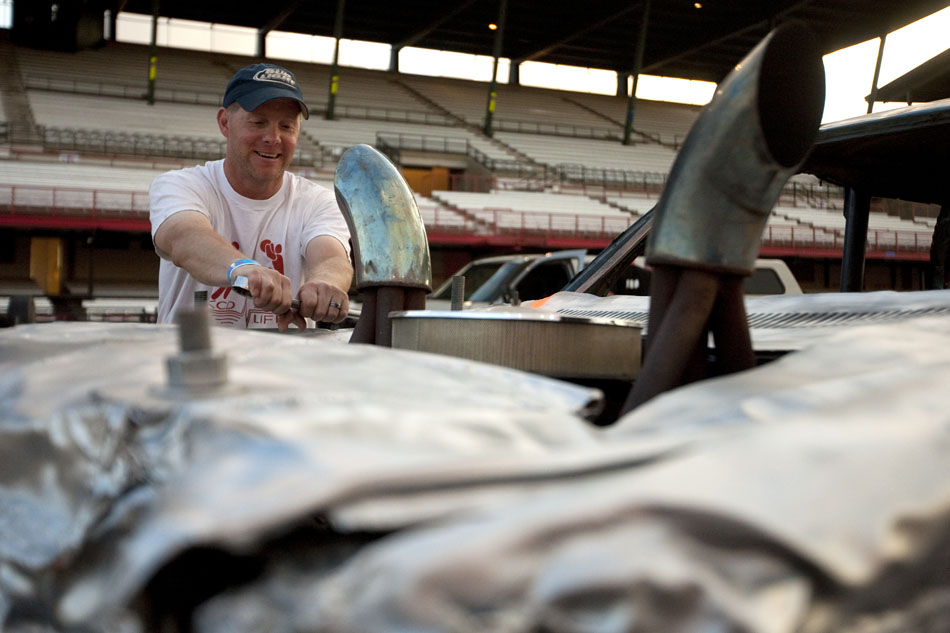 Tim Johnson from Nunn, Colo. uses a wrench to tighten bolts holding the hood of his demolition derby car in place before the derby at the Laramie County Fair on Friday, Aug. 12, 2011, at Frontier Park. "This is my play toy," Johnson said of the vehicle.

At the speedway with Todd Bennett

I spent part of my Saturday evening out at Peoria Speedway photographing Todd Bennett, a local racer who is doing well in the points and has a growing local fan base. The photos are for a profile story that’s running about him sometime soon. I love shooting out at local race tracks because it’s a very unique slice of American culture. The drivers and fans are a blue collar, roll-up-your-sleeves-and-get-stuff-done type of folks who are incredibly friendly and nice. For anyone looking for a good story, I would recommending heading out to the local speedway on a Saturday night. I guarantee you’ll find some interesting people with interesting stories. 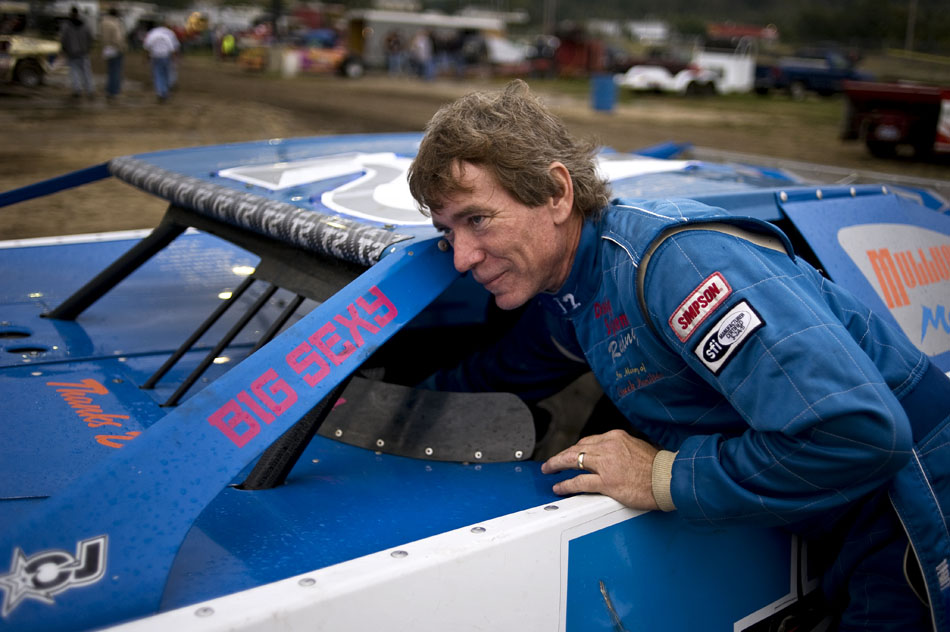 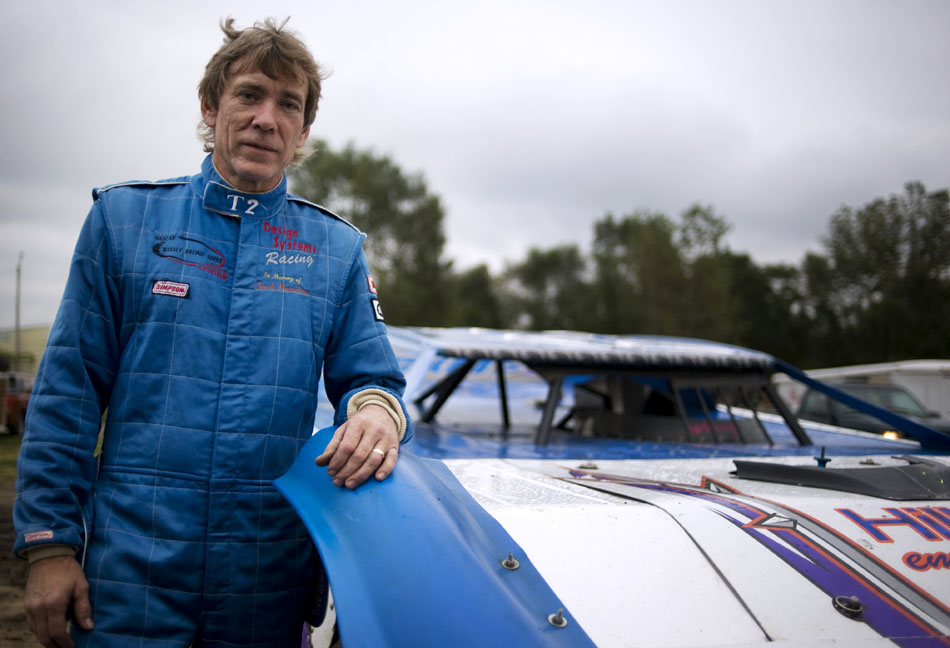 Todd Bennett leans against the front fender of his Super Late Model class race car before taking the car out onto the track for a few laps on Saturday, Sept. 18, 2010, at Peoria Speedway.

To say this is a muddy truck is a bit of an understatement. This is hands down the muddiest truck I have ever seen. When the mud is so bad it blocks your visibility forcing you to look out a window, that’s bad. This was a feature I shot out at Peoria Speedway this evening while I was working on a profile of a local driver. It rained quite a bit today making the track a sloppy mess, and this truck was one of several to take laps on the track in an effort to pack down the mud to make the track ready for the race. 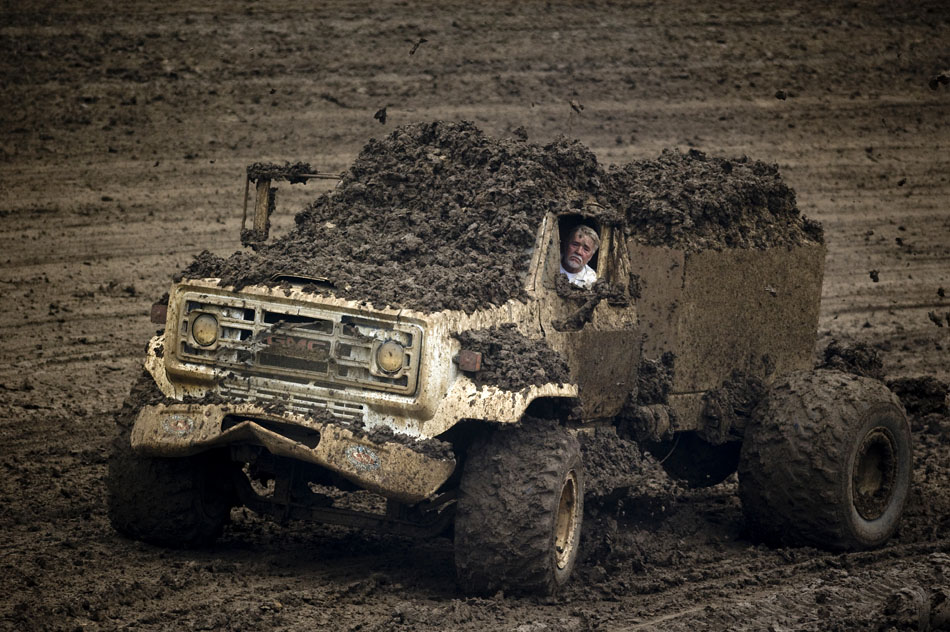 Jim Patterson looks out his driver side window to see as he uses a truck to mash down mud on the track on Saturday, Sept. 18, 2010, at Peoria Speedway. Rain throughout the day made the track too sloppy for racing, forcing some drivers to use their pick ups to help dry and smooth out the track.

Last July I covered the Brickyard 400 at the Indianapolis Motor Speedway. It was my first time covering the race although I had shot infield features that May at the Indy 500. I was flying solo as the only photographer covering the race that day for the Indiana Daily Student. It was … well … an interesting experience. I got to the track at about 4 a.m. to avoid traffic, parked in the infield and took a nap in my car. It can be very challenging to photograph inside the Indianapolis Motor Speedway. Unless you work for a big publication, you have no access. There’s also a bunch of security guards (yellow shirts) who hassle the crap out of you at every turn. Walking into the media center I got stopped so I could show some obscure sticker on the back of my credential despite carrying two bodies and having a 300 mm lens thrown over my shoulder. Apparently I didn’t look legit enough. Moral of the story: the bigger the event, the worst the access. This means a smaller opportunity to get good moments. I would much rather shoot a high school basketball championship game than the NBA Finals. Sure, it’s cool to say you shot something like that, but oftentimes the access is better, less stressful and allows you to capture more moments at a smaller event. 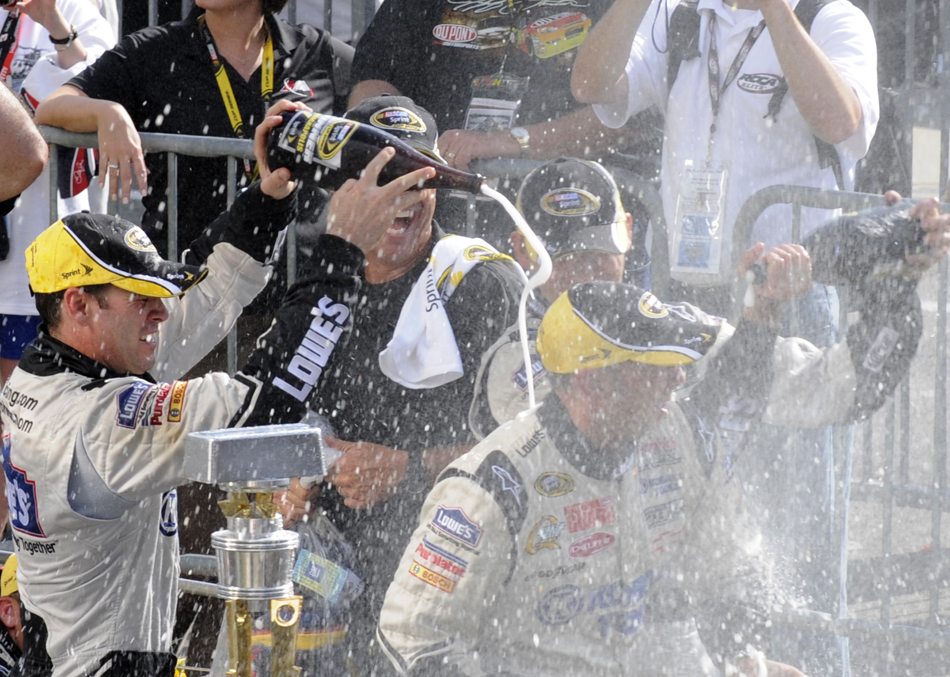 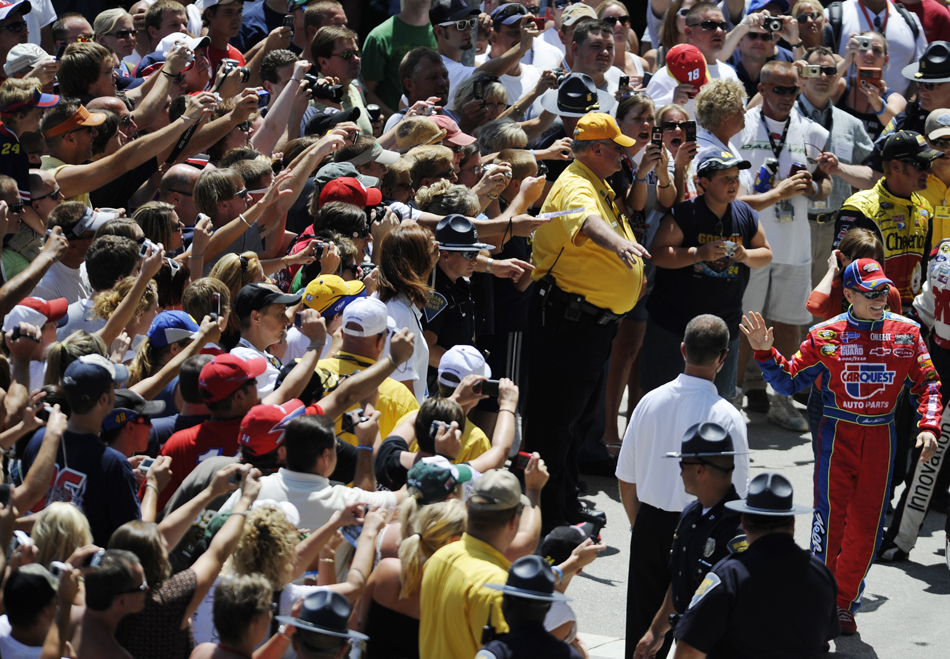 Pole sitter Mark Martin, far right, waves to fans as he makes his way into the pagoda for driver introductions before the start of the Brickyard 400 on Sunday, July 26, 2009, at the Indianapolis Motor Speedway.