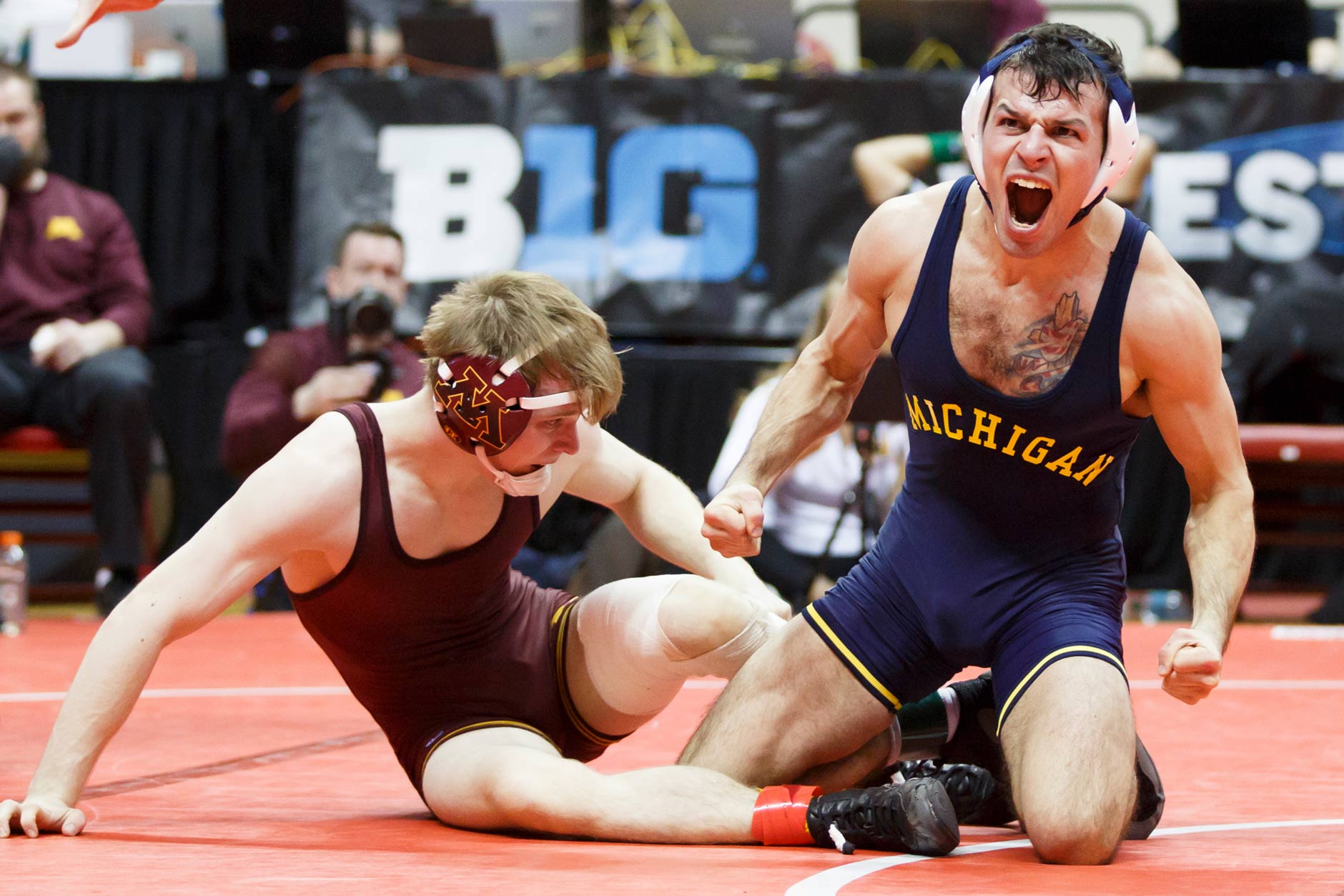 Michigan’s Conor Youtsey celebrates a win against Minnesota’s Ethan Lizak in the quarterfinals of the Big Ten Wrestling Championships on Saturday, March 4, 2017, in Bloomington, Indiana. (Photo by James Brosher) 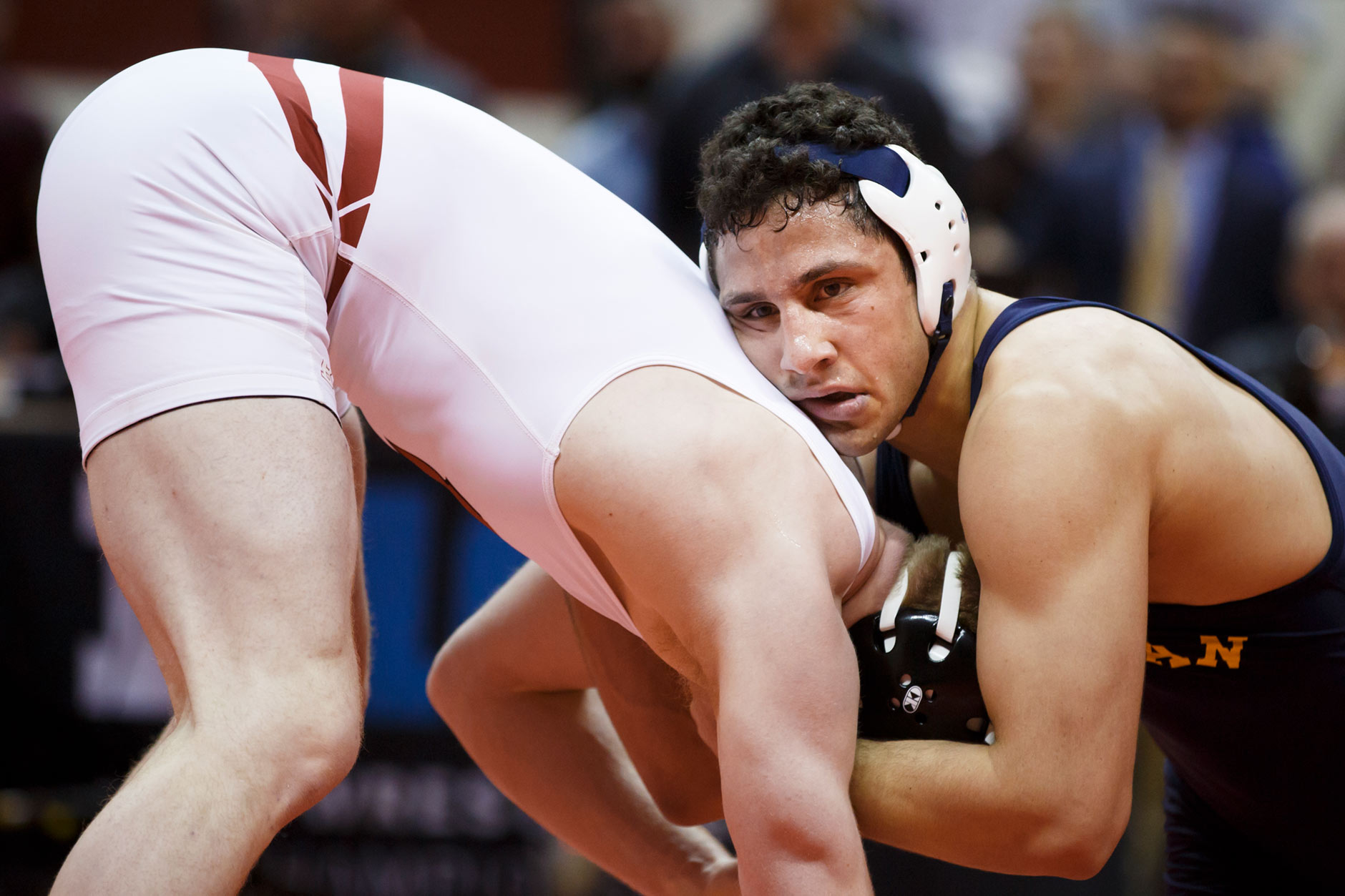 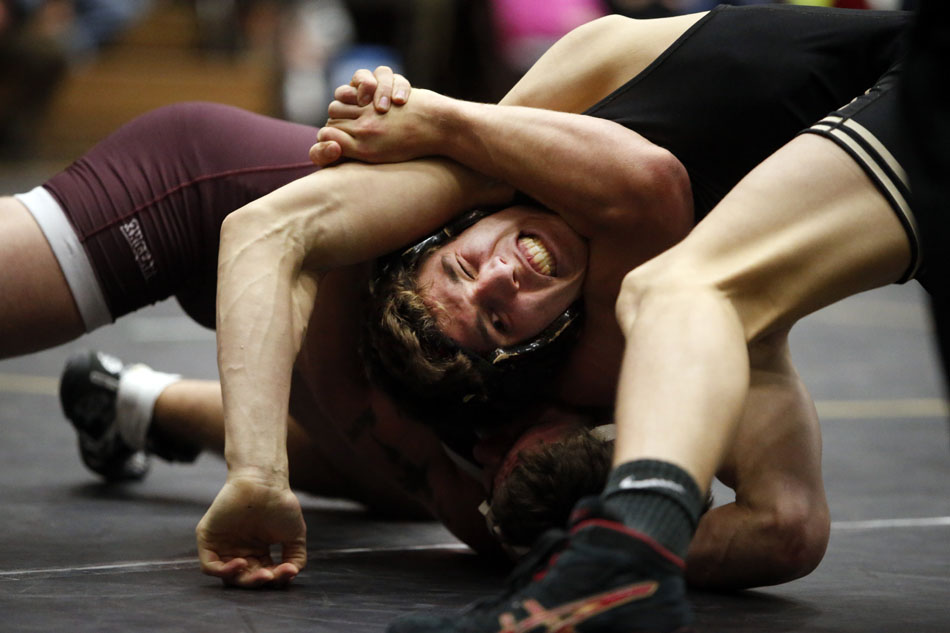 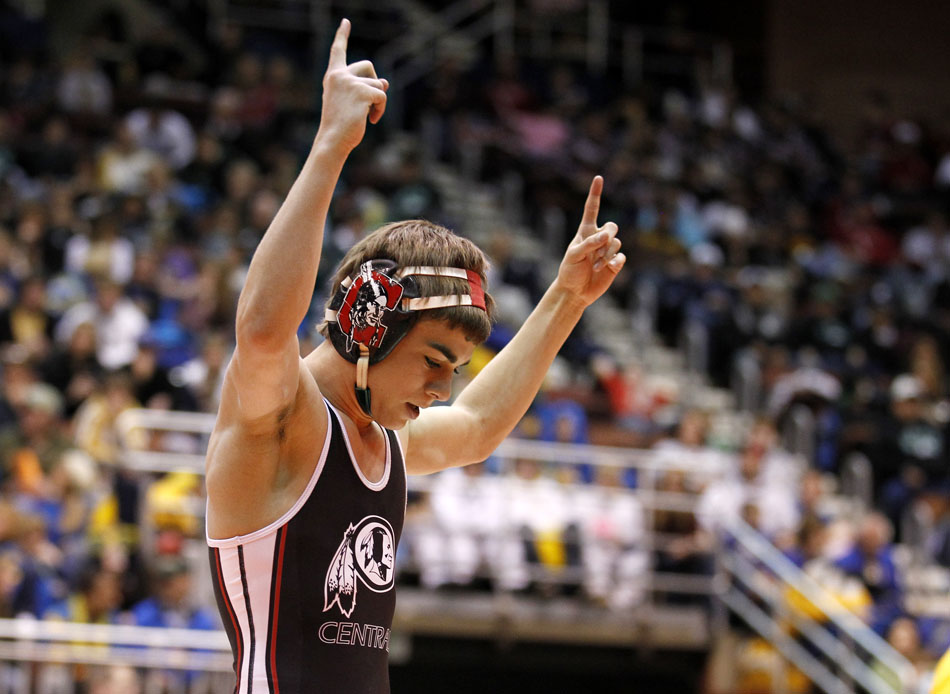 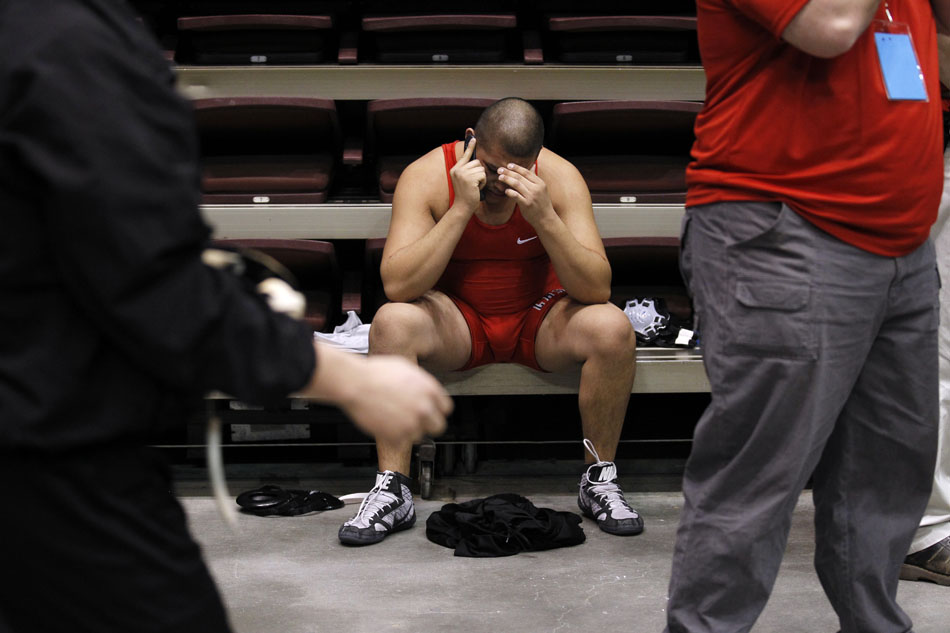 Cheyenne Central's Leon Romero talks on the phone after a loss to Natrona County's Greg Lensert in a Class 4A 215-pound wrestleback match during the Wyoming high school state wrestling tournament on Saturday, Feb. 26, 2011, in Casper, Wyo. 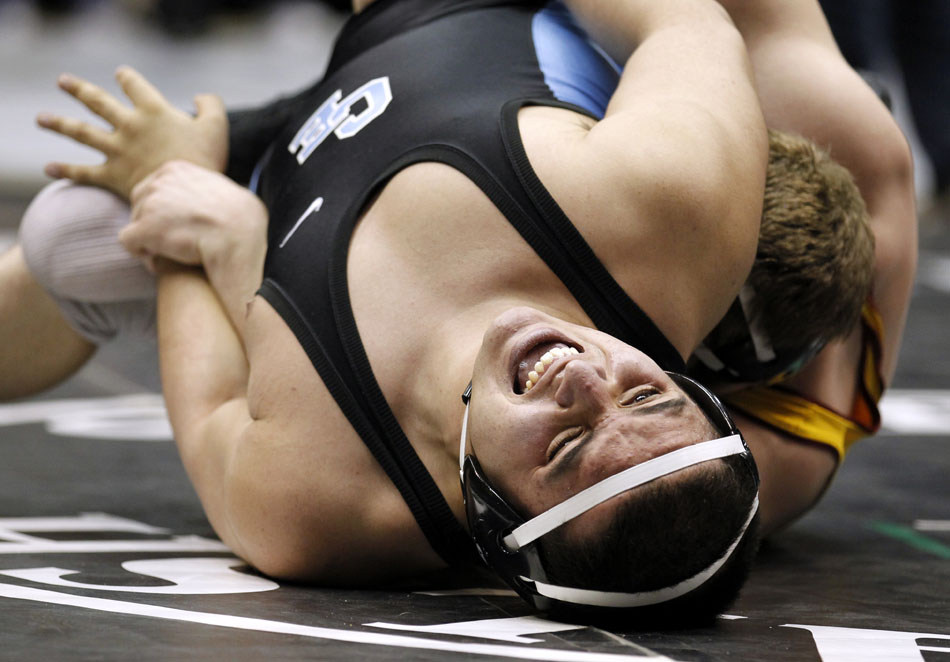 Cheyenne East's Michael Galicia reacts as he's twisted by Star Valley's Dawson Loveland during a semi-final match in the 4A 215 pound weight class on Friday, Feb. 25, 2011, in Casper, Wyo. Loveland won the match. 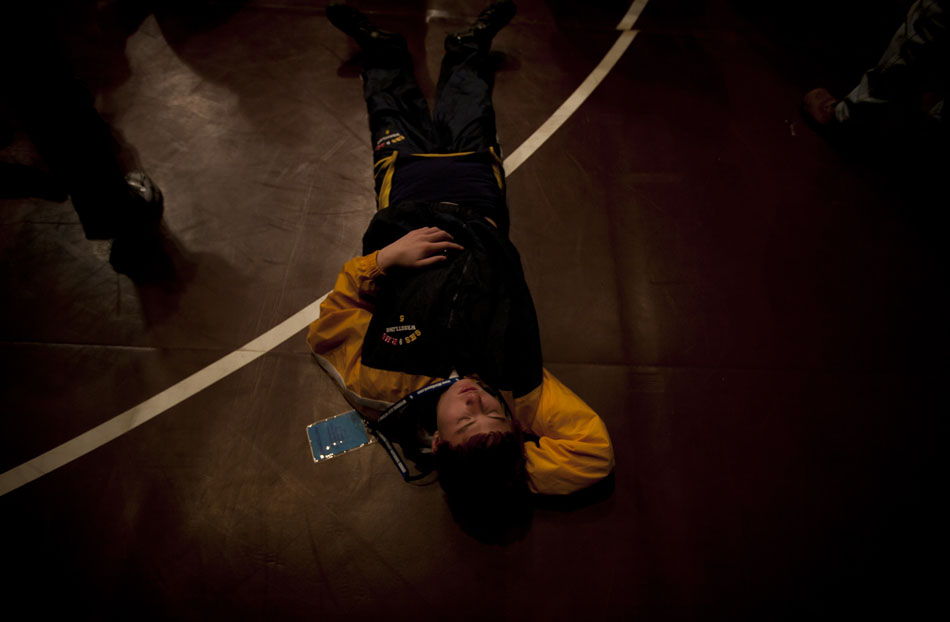 Greybull wrestler Nathen Gossens takes a nap during the March of Champions at the Wyoming state wrestling finals on Friday, Feb. 25, 2011, in Casper, Wyo.

My only assignment this evening was to get a standalone shot of the action from a Cheyenne South-Rawlins wrestling match. I walked into the gym to find the lights out with a single light hanging about 10 feet over the mat. My first thought was “sweet, dramatic light.” This eventually ended up being “oh (fudge), I can’t shoot action in this light.” Wrestlers (like hockey players) don’t look up very often, making my job pretty hard since that’s where the main light was. I ended up staying for the entirety of the match ups, but this was the best shot I produced: 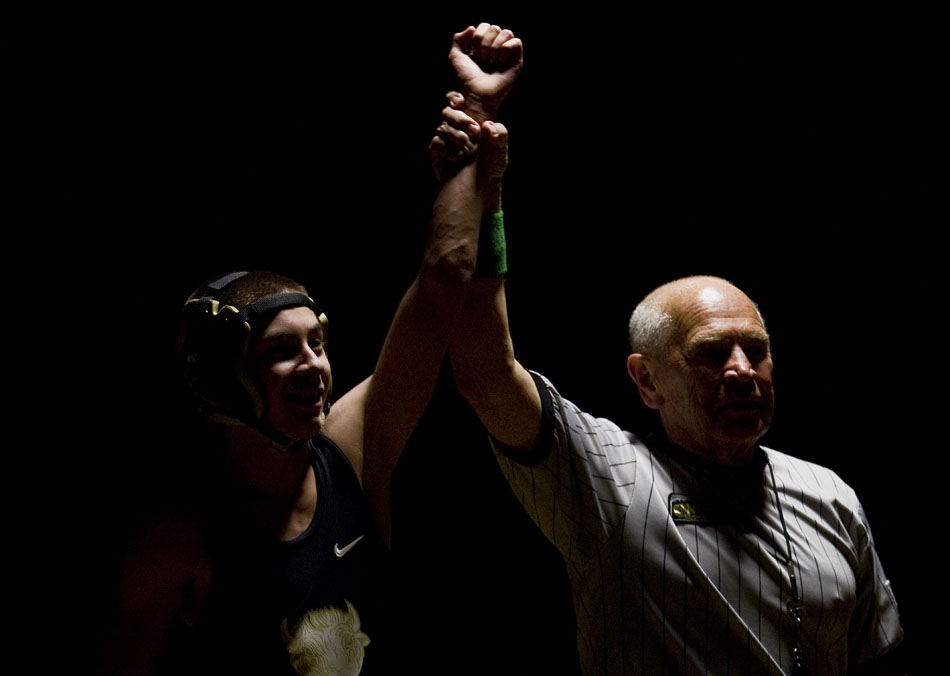 South wrestler Elijah Salas reacts as the referee names him the winner of a match against Rawlins wrestler Colby Murphy in the 103 weight class on Thursday, Jan. 27, 2011, at South High School. Rawlins won 48 to 35.

I got the opportunity to shoot my first prep athlete of the week sportrait on Tuesday evening. Every week, the paper names an athlete from a local high school, which gives the photo staff a nice opportunity to go all-out on a sportrait. Given that it was my first one, I played it pretty safe and didn’t do anything too experimental out of the gate. It’s a pretty basic three-light setup with two back lights at 45 degree angles from the subject. The key light was shot through a gridded softbox from a 45 degree angle to the right next to the camera. The subject was a pretty nice guy who helped me unload the lights from my truck before the shoot and was extremely patient while I look about 20 minutes to set everything up.

Central freshman wrestler Bryce Meredith poses for a portrait on Tuesday, Jan. 25, 2011, in the Central High School wrestling room. Meredith is the Tribune-Eagle prep athlete of the week. 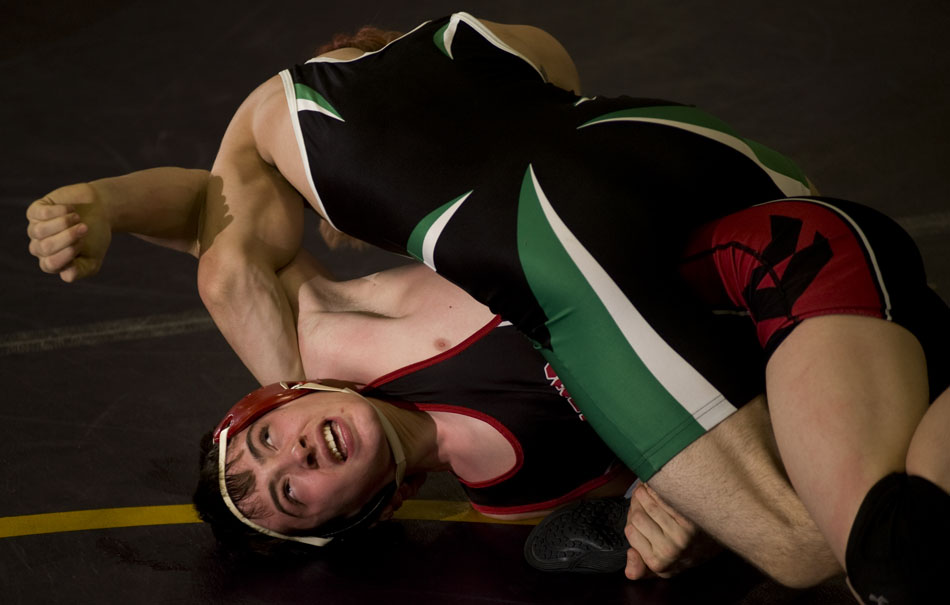 Springfield's Kris Kramer reacts as he fights off a pin from Eureka's Chris Griffieth during a tournament on Saturday, Dec. 4, 2010, at Notre Dame High School. 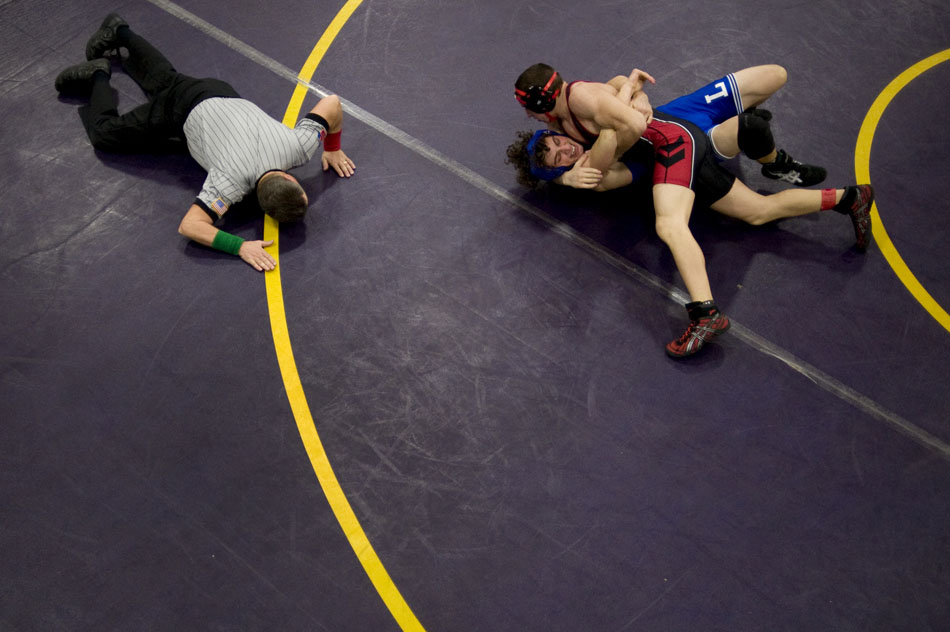 The referee watches closely as a Limestone wrestler attempts to pin his Springfield counterpart during a tournament on Saturday, Dec. 4, 2010, at Notre Dame High School. Edgewood's Seth Sturgeon gets position on South's Colton Dixon during a match on Tuesday, Jan. 19, 2010, at Edgewood High School. Edgewood's Zach Ferguson struggles to get back to his feet during a match against South's Sam Horrocks on Tuesday, Jan. 19, 2010, at Edgewood High School.