Arctic weather returns to South Bend (did it really ever leave?)

These days South Bend is feeling more like Siberia. If the substantial snowfalls we keep getting aren’t enough, we are also constantly dealing with sub-freezing temperatures. For the second time this year, the city of South Bend declared a winter weather emergency. And this is coming from a city that is most certainly accustomed to big winter snowfalls. It’s hard to stay creative from a visual standpoint in these arctic weather conditions, especially since I’ve been shooting the same photos in essence since late November. Spring cannot arrive soon enough. 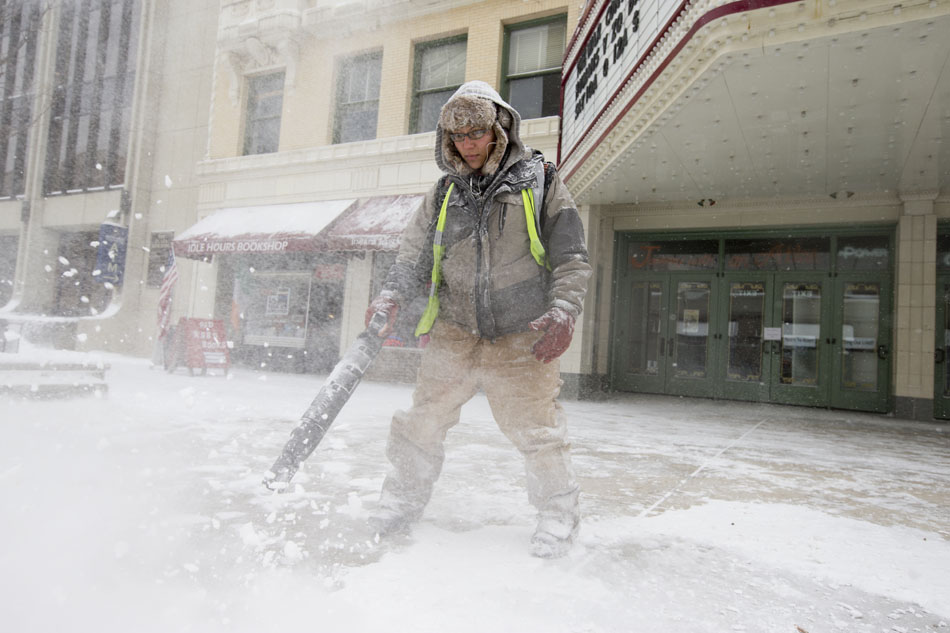 Erika Cruz, a South Bend Parks and Recreation employee, uses a blower to clear snow off the sidewalk in front of The State theater on Thursday, Jan. 23, 2014, in downtown South Bend. A frigid and snowy month continued as temperatures plunged below freezing yet again. (James Brosher/South Bend Tribune) 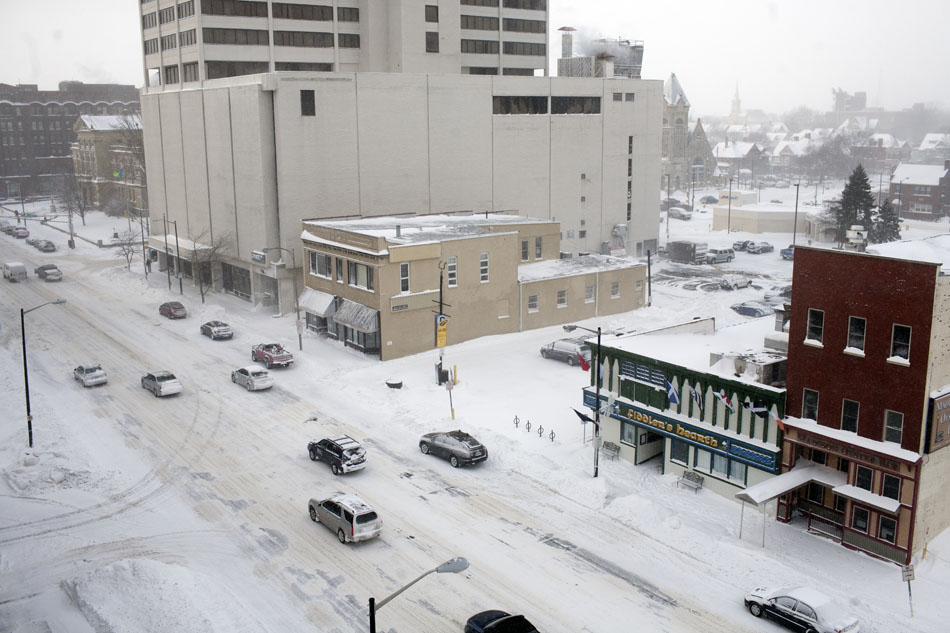 After reports in the national media and on social media, I was sent to Michigan City, Ind. on Thursday evening to photograph the scene of a colossal pileup. My drive happened to coincide with one of the worst snow storms I’ve ever had to drive through (and this is coming from someone who lived in Wyoming). Somehow I made it and was able to make a few pictures of the destruction along the interstate. It’s truly unlike anything I had ever seen. It was so unread it seemed like something one might see in a disaster movie. 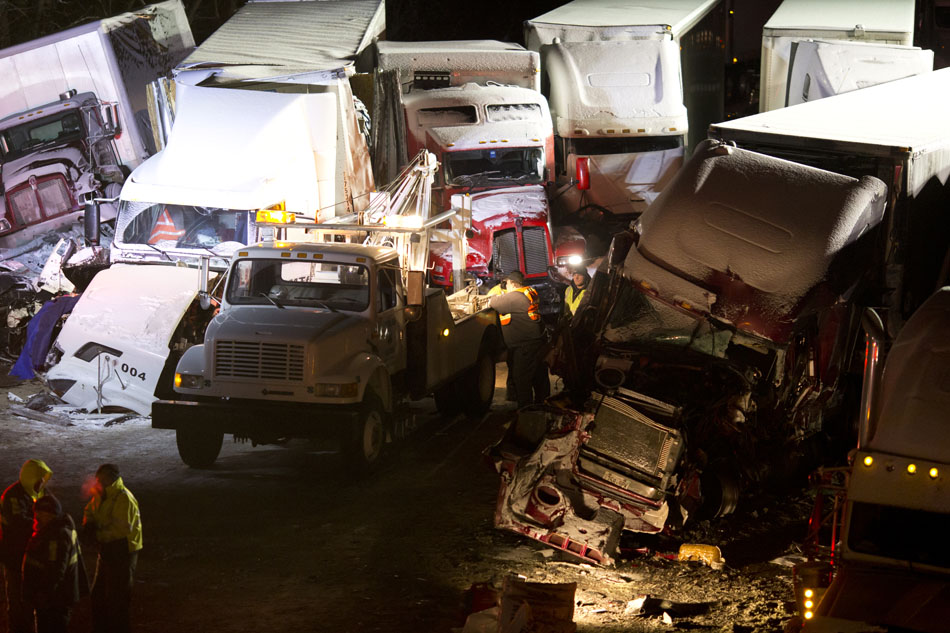 Police and firefighters work to clean up a colossal crash in the eastbound lane of Interstate 94 near Michigan City, Ind. on Thursday, Jan. 23, 2014. Three died and more than 20 others were injured in the pileup. (James Brosher/South Bend Tribune) 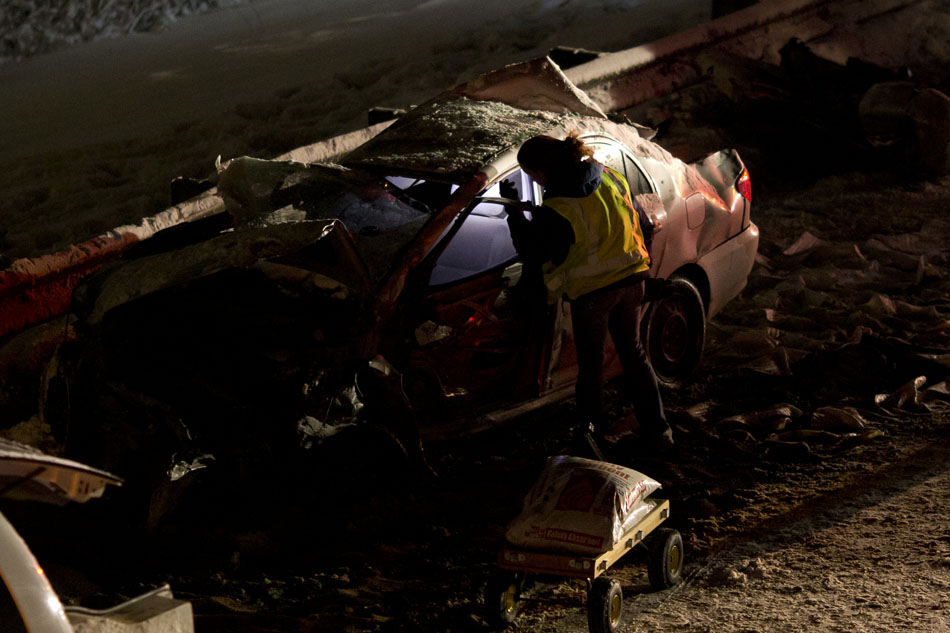 A first responder checks inside a mangled passenger vehicle after a colossal crash in the eastbound lane of Interstate 94 near Michigan City, Ind. on Thursday, Jan. 23, 2014. (James Brosher/South Bend Tribune)

My assignment today was to cover the snow storm and extreme cold weather. We here in South Bend are under a “Disaster Emergency Declaration” through noon on Tuesday. I had trouble finding people because the entire city was like a ghost town. It was quite an eerie feeling to look down the main drag of downtown South Bend to see no cars or traffic on a Monday morning. (Because of the emergency declaration, people are being advised to stay off the roads with the threat of $500 citations by police.) The only people I saw outside today for the most part were plow drivers, USPS workers and – you guessed it – fellow journalists. The lack of people ended up being the basis of a lot of my photos today: eerie streetscapes where people should be (third photo). All things considered, it was a decent day at work with only one near-death experience. Looking forward to shooting a few more things on my “hit list” tomorrow as the snow removal continues. 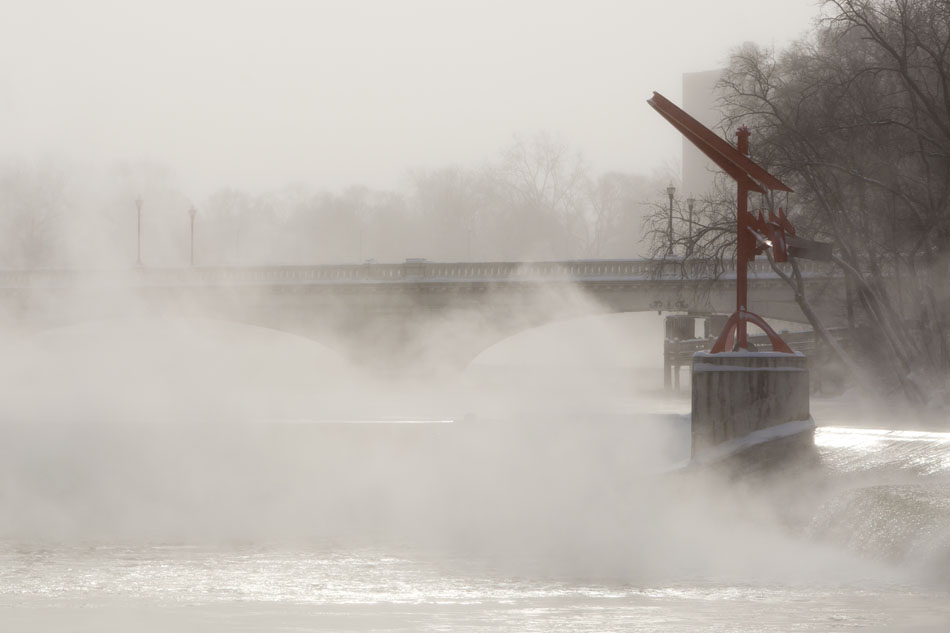 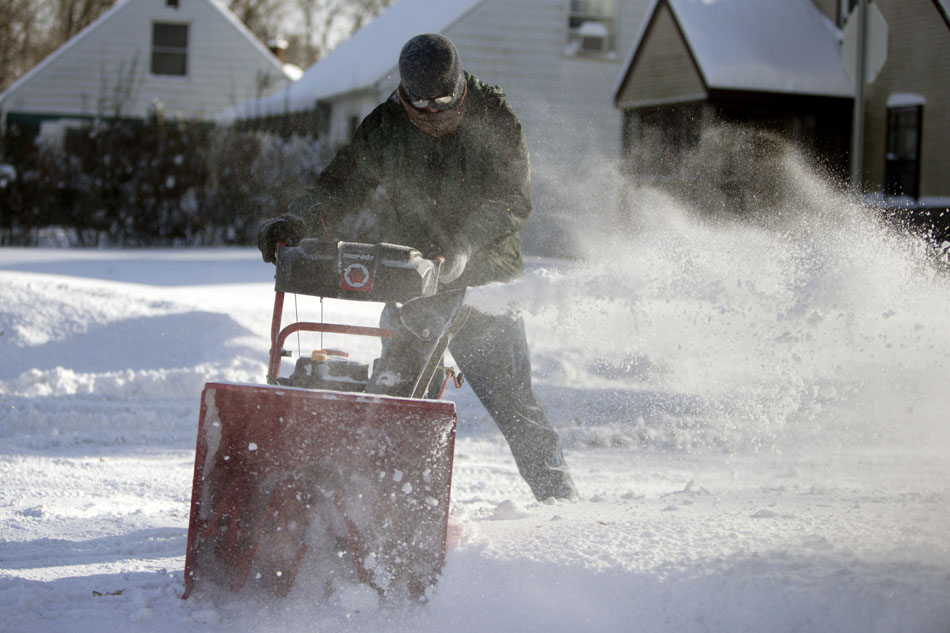 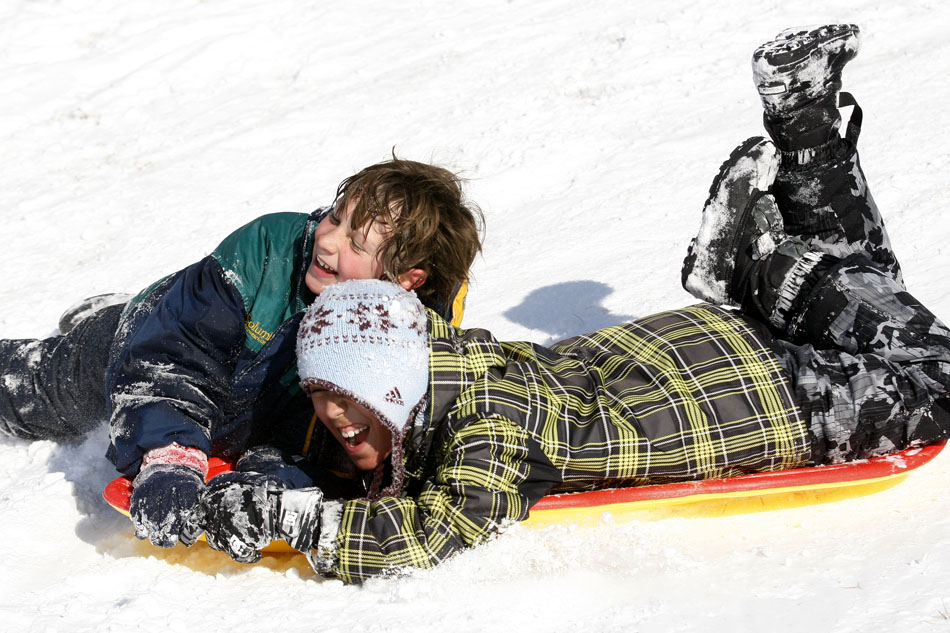 Max Grove, left, 10, and Simon Lozano, 11, react as they sled down an hill into Pando Park on Saturday, Dec. 3, 2011, in Cheyenne. Several youngsters took to the park for sledding on the fresh powder on Saturday after a Friday night snowfall.

A week before Halloween can only mean one thing: good sledding right? Well usually not, but thanks to several inches of snowfall on Tuesday evening, Pando Park in Cheyenne was filled with kids and their parents trying out the fresh powder with their sleds on Wednesday afternoon. 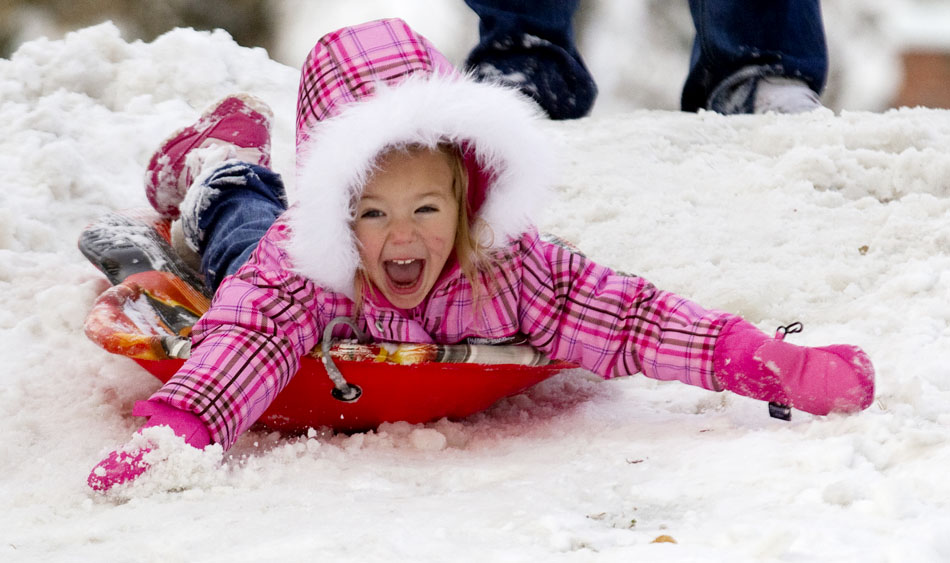 Taylor Hollibough, 3, reacts as she slides down a hill into Pando Park on Wednesday, Oct. 26, 2011, in Cheyenne. It was the first time Hollibough had sledded by herself on her own sled.

One hail of a night

Tuesday started off as a very slow day until it wasn’t. I was on my way back from Wheatland Tuesday afternoon when a severe thunderstorm rolled through town. Luckily, I was miles north on Interstate 25 when a hail storm pounded much of the central part of the city, leaving cars across the city dimpled with hail dents. When I drove past the Wyoming State Capitol, it became apparent this wasn’t a typical hail storm. There was a ton of hail. I swung by the office then headed back out to look for storm aftermath shots. I parked near Pando Park and shot a few kids playing in the park that was submerged in about 40 inches of water. A parent mentioned Pershing Avenue got pounded by the hail. I jumped in my truck and drove over to Pershing. A few blocks down the street, I noticed some extreme fog in a cemetery and doubled back to shoot a ghostly shot of the fog rising amongst the tombstones. At this point, I had to put my truck into four wheel drive to make it down the streets. A police car caught my eye as I headed south. One of the intersections – 23rd Street and Bradley Avenue – was completely submerged and covered in hail. I noticed a lot of people gathered at the intersection as some residents tried to clear drains. I ended up shooting most of my take at that intersection. I’ve been in Cheyenne for seven months now, and this is by far the craziest story I’ve covered. I have never seen hail like this before, especially with such a large accumulation. It reminds me of a scene from “The Day After Tomorrow.” 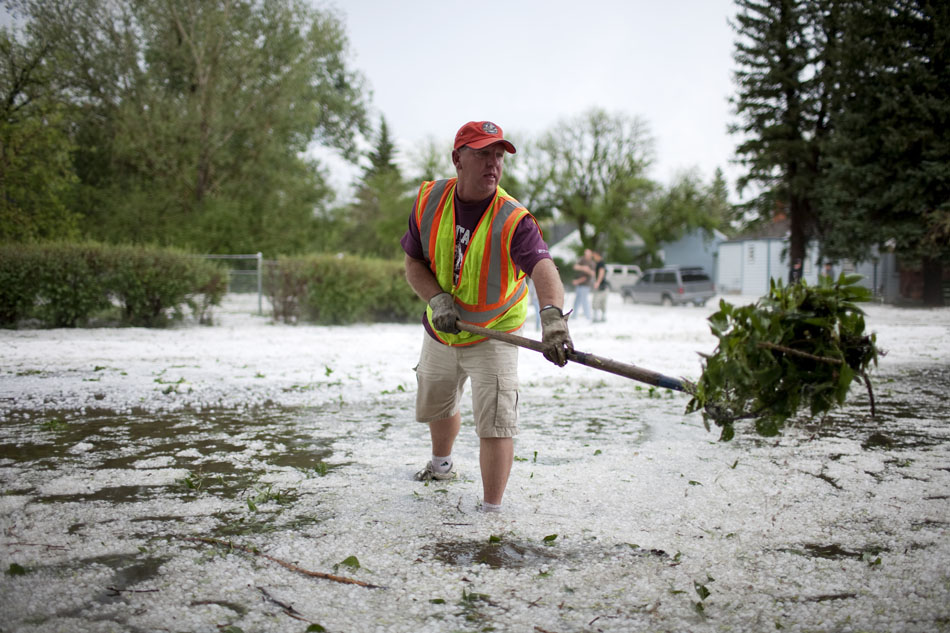 Dave Hefenieder, a Cheyenne employee, uses a pitch fork to unclog a storm drain at the intersection of 23rd Street and Bradley Avenue on Tuesday, July 12, 2011, in Cheyenne. Cheyenne received 1.46 inches of rain between 5:15 and 5:50 p.m., according to the National Weather Service along with hail up to golf ball size. 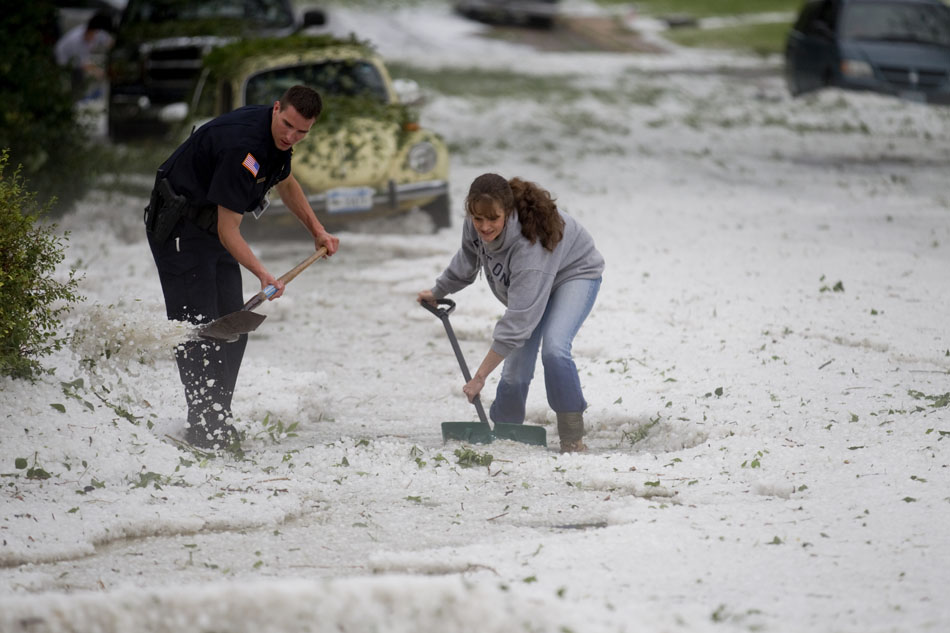 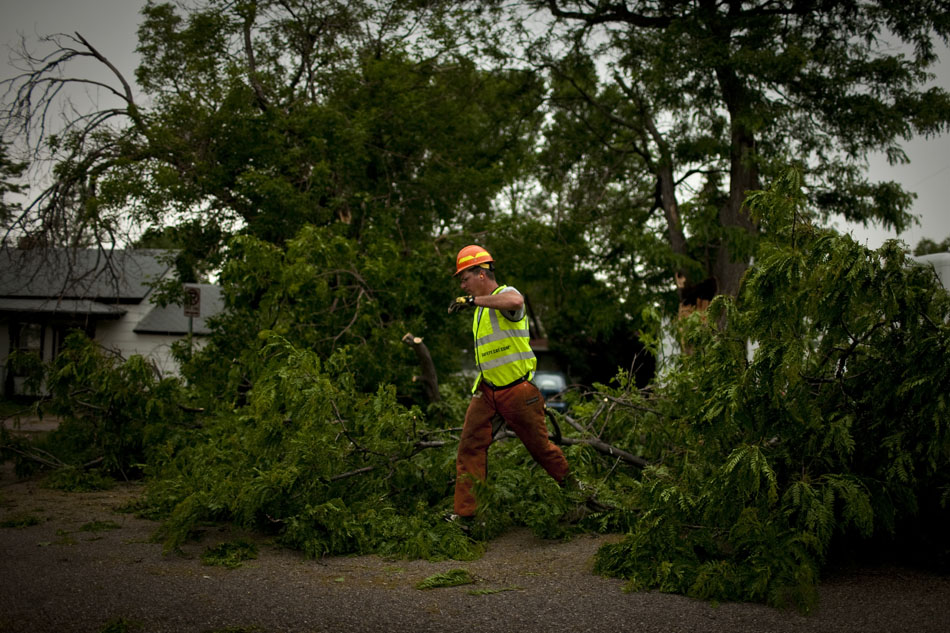 Edward Cullen, a City of Cheyenne employee, puts his arm up as he hops over a downed tree limb on Thursday, June 30, 2011, along House Avenue between Sixth and Seventh streets on the city's southeast side. Cheyenne spent part of the evening under a severe thunderstorm warning as rain and high winds swept across the area.

I got a weather alert on my phone that seemed a little puzzling. Fog warning. Seriously? I got it midday in what was a chilly, overcast day. I thought my phone was messing with me again. That was until I went out to Powers Field to cover Cheyenne Post 6’s game at 7:30 p.m. I showed up a bit early to get a few features of the crowd, but soon after I arrived a dense fog appeared quickly and rolled across the field. The JV game before the varsity game was eventually delayed and called when the fog became so thick that outfielders couldn’t see fly balls in the outfield. The whole scene had a ghostly feel about it. Reminded me of that movie “Silent Hill,” except for the whole being dead and not knowing it part. At least, I don’t think I’m dead. That would be unfortunate. 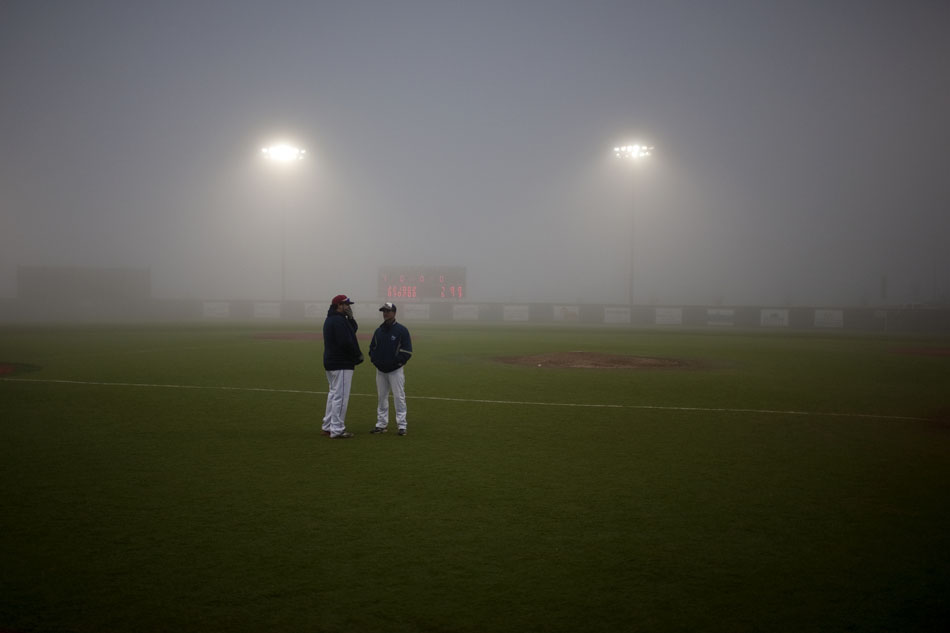 Coaches talk on the field during a fog delay on Sunday, May 29, 2011, at Powers Field in Cheyenne. The fog blanketed the outfield making it hard to see pop ups, forcing officials to postpone a game between Cheyenne Post 6 and Ralston Valley until 9 a.m. on Monday. 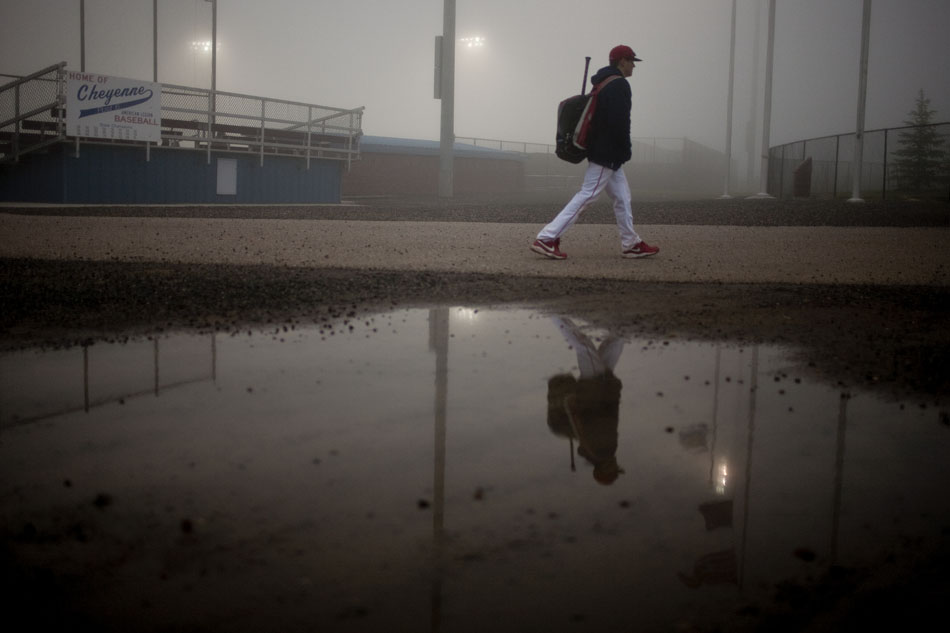 So I guess winter has finally arrived in Cheyenne. Since I’ve been here, this was only the second serious snow fall we’ve received. It’s only the second time I’ve had to put my truck into four wheel drive to get around town. Some days it’s incredibly hard to find features around town. Today that wasn’t the case. Early in the day, there were a lot of people cleaning off cars and sidewalks on almost every corner. I even ran across a group of antelope leisurely walking around a neighborhood in the city. 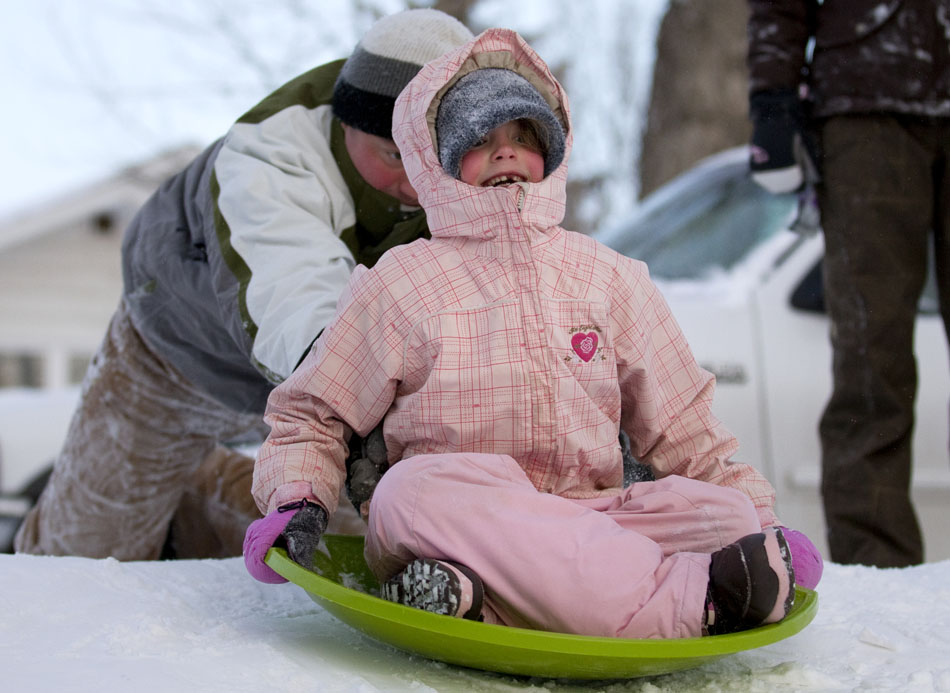 Sky Bluemer, age 7, reacts after getting a starting shove from her dad, Tyler, sending her sledding down a hill on Tuesday, Feb. 8, 2011, at Pando Park in Cheyenne. A fresh snowfall attracted a few folks to the park with their sleds. 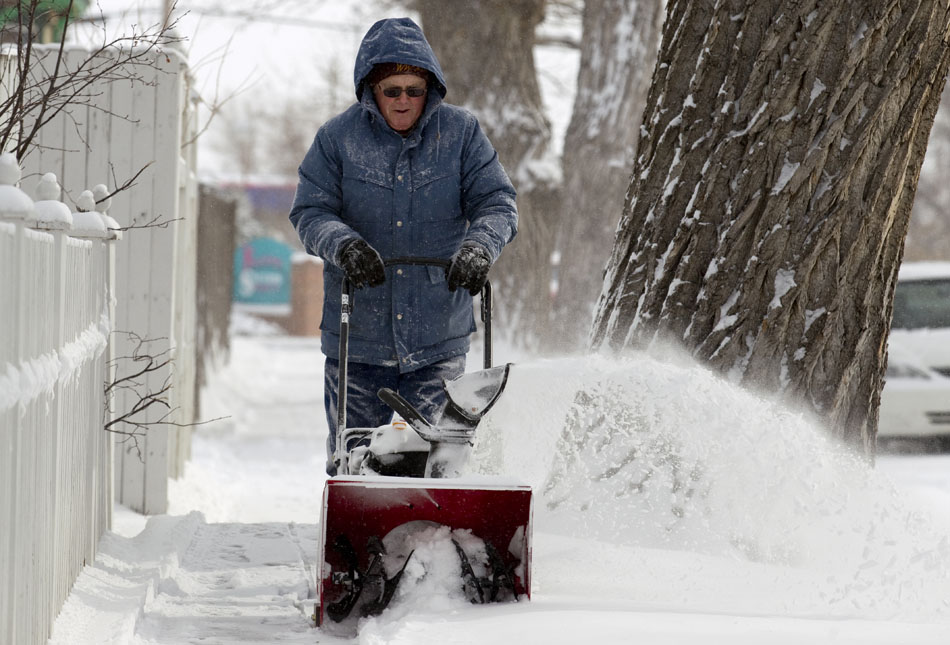 A man who would only give his first name, Allen, clears a sidewalk on Tuesday, Feb. 8, 2011, along Maxwell Avenue at the intersection with 18th Street. The man said he had cleared several of his neighbor's sidewalks after a winter storm dumped several inches of snow on Cheyenne late Monday and in the morning on Tuesday.

Tracks in the snow 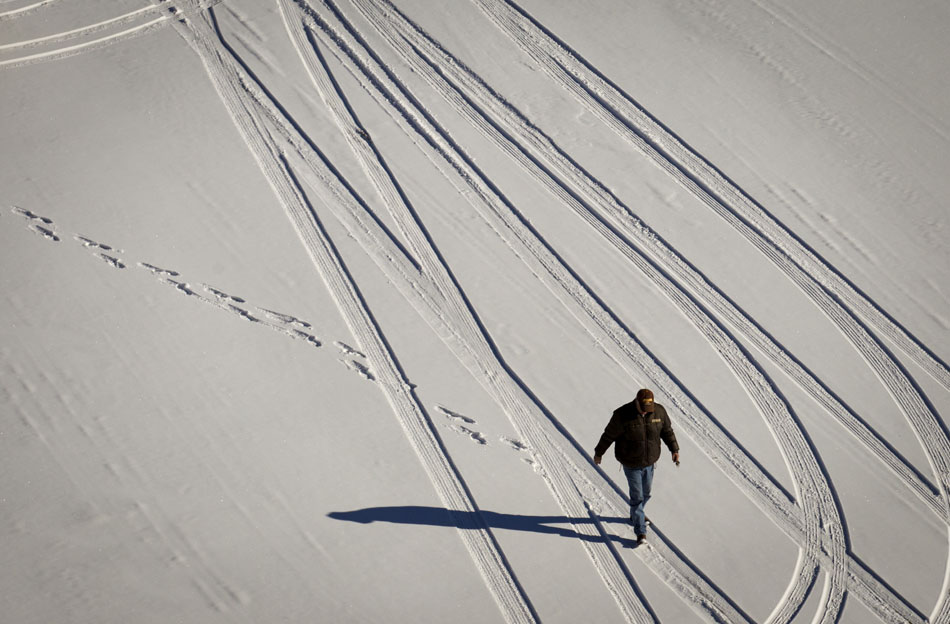 A Wyoming supporter crosses the stadium lot on Wednesday, Feb. 2, 2011, at War Memorial Stadium on the University of Wyoming campus in Laramie, Wyo. Several fans and boosters attended the team's official announcement of the 2011 football recruiting class at the stadium later in the day.