For the second year in a row, I self-assigned myself the Ducktail Run Rod & Custom Show in Gas City, Ind. The show is part of James Dean weekend in Grant County, Indiana where the film star grew up. The weekend marks the anniversary of his death in a car accident in 1955. As a kid, I grew up going to car shows with my folks and always had a blast at this show in particular. Being the last weekend of September each year, it unofficially marks the end of the car show season in Indiana. It’s an extremely visual event with colorful cars, colorful foliage from the park trees and colorful personalities. As someone who gets paid to make pictures for a living, it’s nice sometimes to get away from the office and the daily grind to make some pictures for myself for fun. I didn’t have any deadlines, picture count quotas or time constraints. I wandered around the park several times and shot things I found interesting. 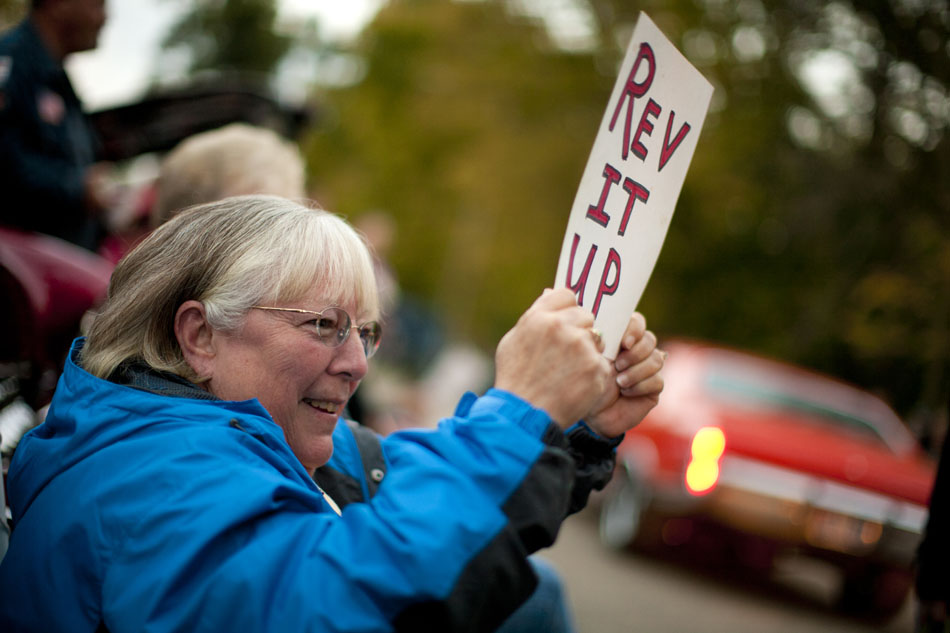 Spent Father’s Day hanging out with my dad as he helped host a car show with his car club down in Kokomo, Indiana. Didn’t shoot much, but after the show was over got a frame of dad relaxing after a long day in the heat. I’ll make sure to put this picture on his Father’s Day card next year. 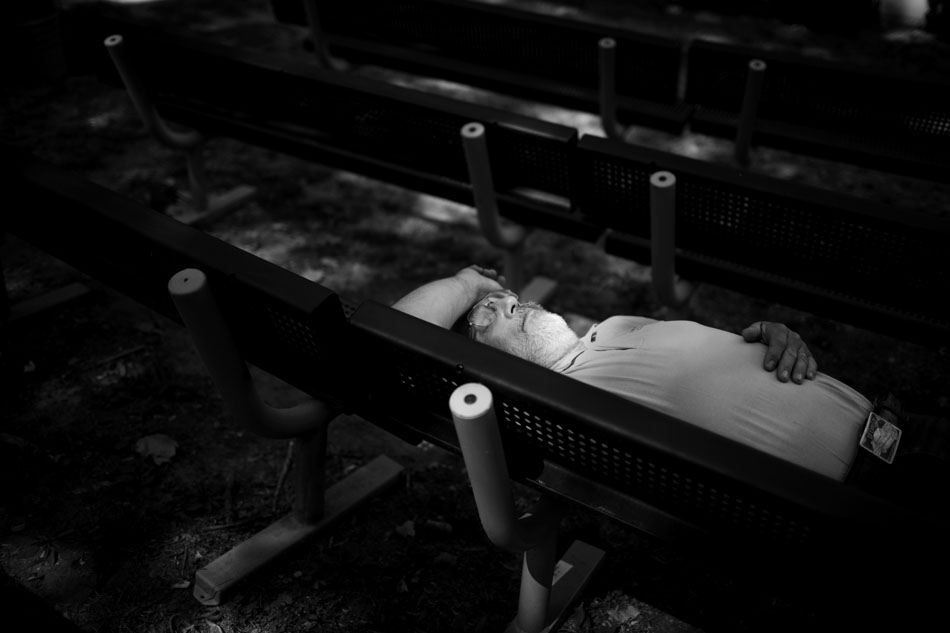 I usually don’t find myself taking photos at 2:50 a.m. very often. But I made an exception a couple nights ago when my folks got ready to depart my apartment for Indiana at that very time. About 18 hours later my folks were sitting in their driveway in Dunkirk, Ind. Not too shabby. Europe through a plastic lens

Now that I’ve had a chance to go through all the film from my trip to Germany and Austria, I wanted to share my favorite photos I took with my Holga earlier this summer. Using the Holga for the first time was a great challenge to someone like me who hasn’t shot film since high school. It was a lot of fun to challenge myself to make pictures in a foreign environment with a camera that was foreign to me. 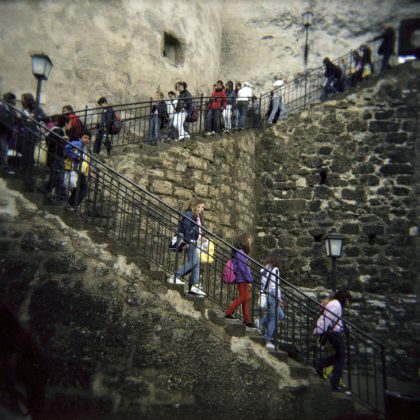 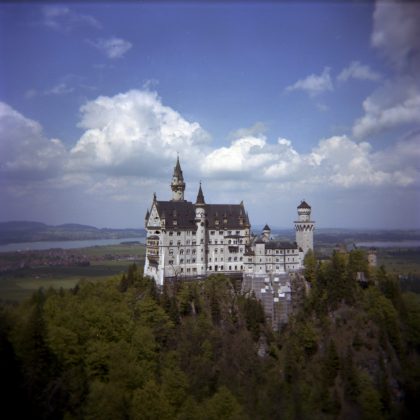 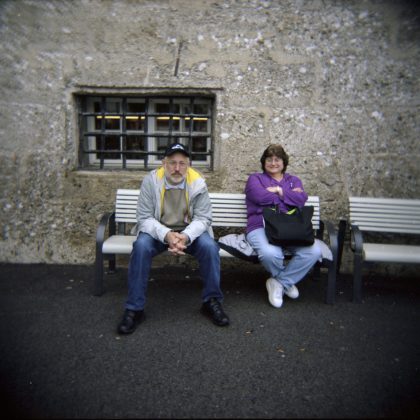 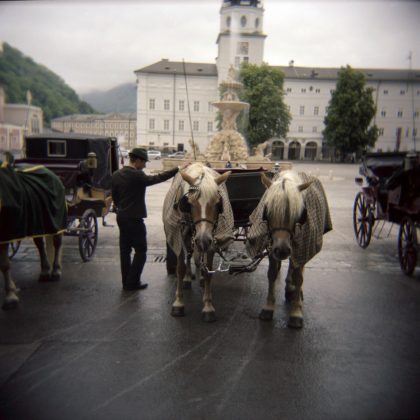 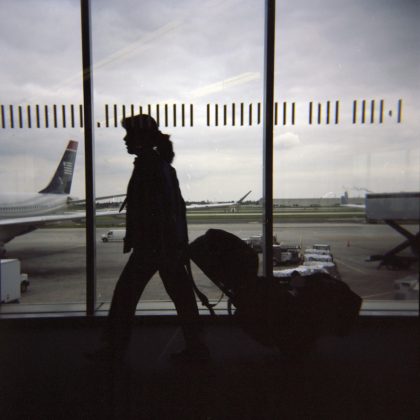 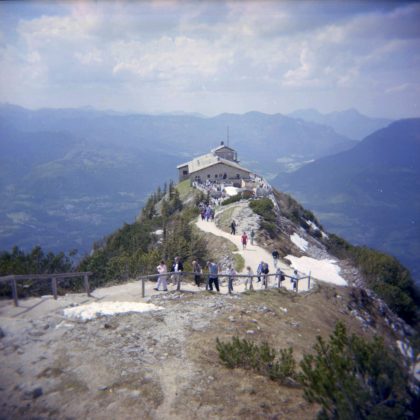 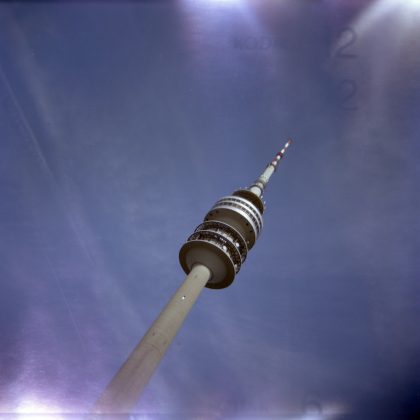 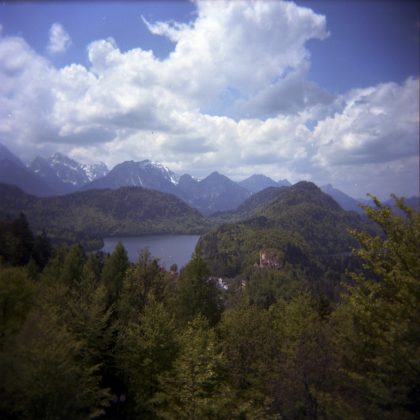 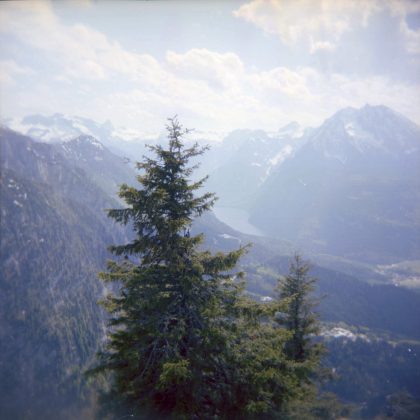 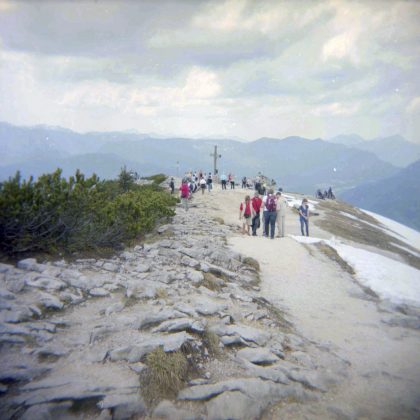 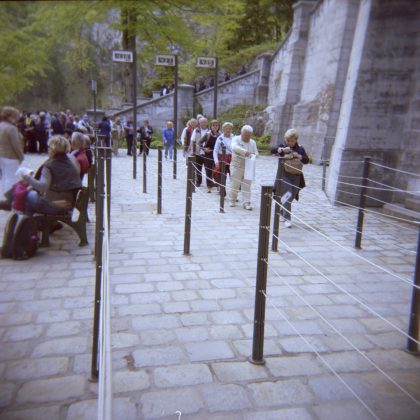 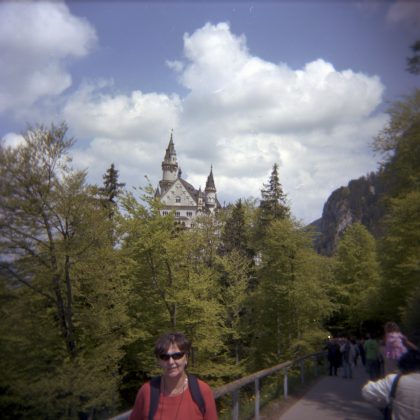 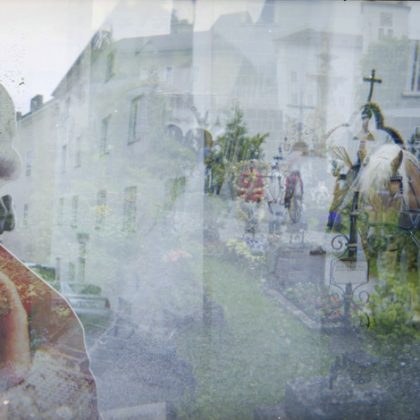 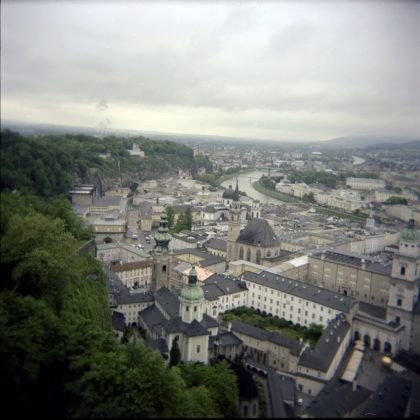 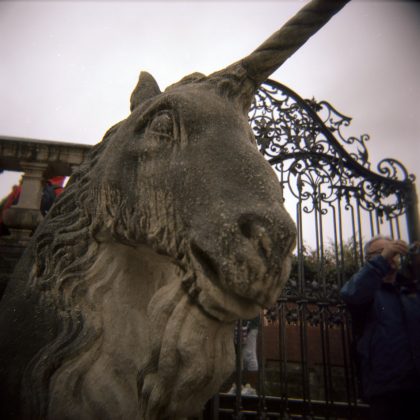 In Salzburg, Austria today, I tried to continue a general theme I established in Munich on Thursday. Instead of photographing the buildings and the sights (the things that are photographed most often by tourists), I tried to look beyond what’s there for a less-often represented feature photo. I did a better job of this in Salzburg than I did in Munich because I spent more time walking around Salzburg. Also, I finally put the Holga to use and shot a couple of rolls including a multiple-exposure collage of sorts with a few of the Salzburg sites. Here’s a few of my shots from today sans the Holga shots: 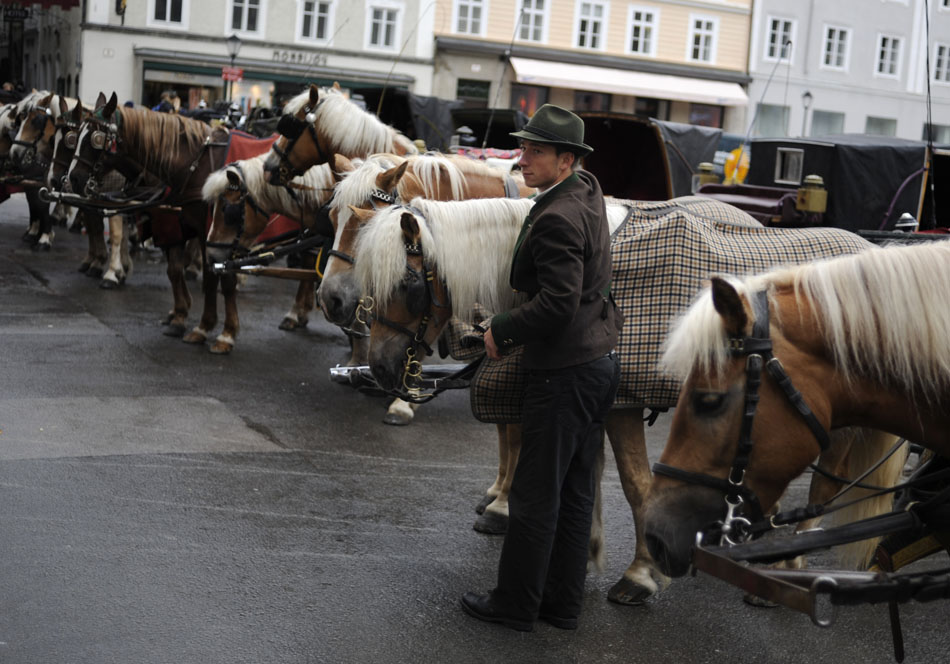 A horse carriage driver pets one of his horses as he awaits customers on Friday, May 21, 2010, in the Old Town area of Salzburg, Austria. 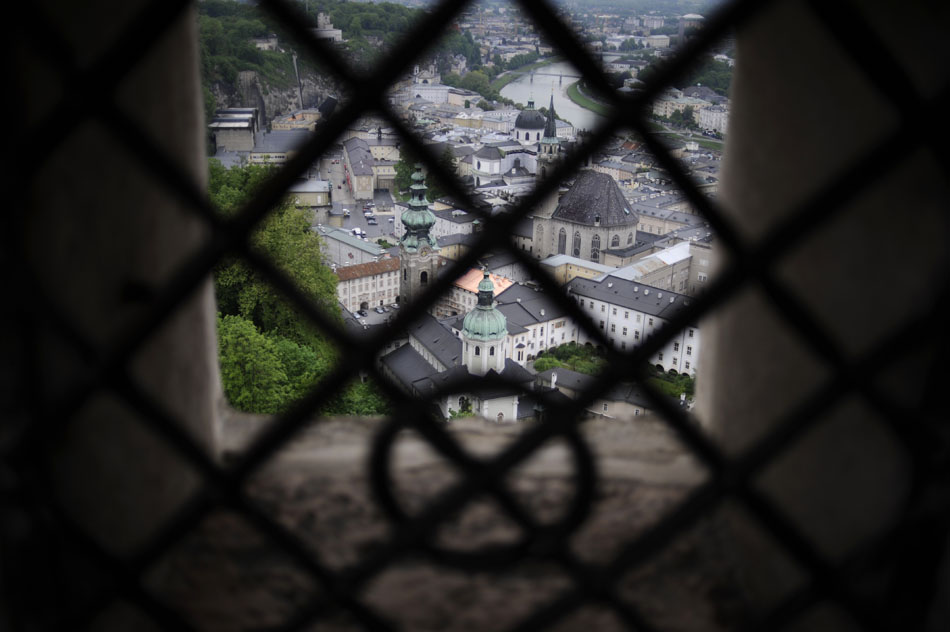 Salzburg's Old Town is seen through window bars inside the city's famed Festung (Fortress) on Friday, May 21, 2010, in Salzburg, Austria.

Since I’ve been done with finals since Tuesday, I came home to spend a few days at my parents’ place in Dunkirk, Ind. While I was home today, my dad was working to install a new 5-speed manual transmission in his 1957 Chevy Bel Air. I made a few pictures of his work as he uncovered some rust and interesting patchwork under the carpet in the interior of the car as cut a new hole in the floor for the shifter lever. 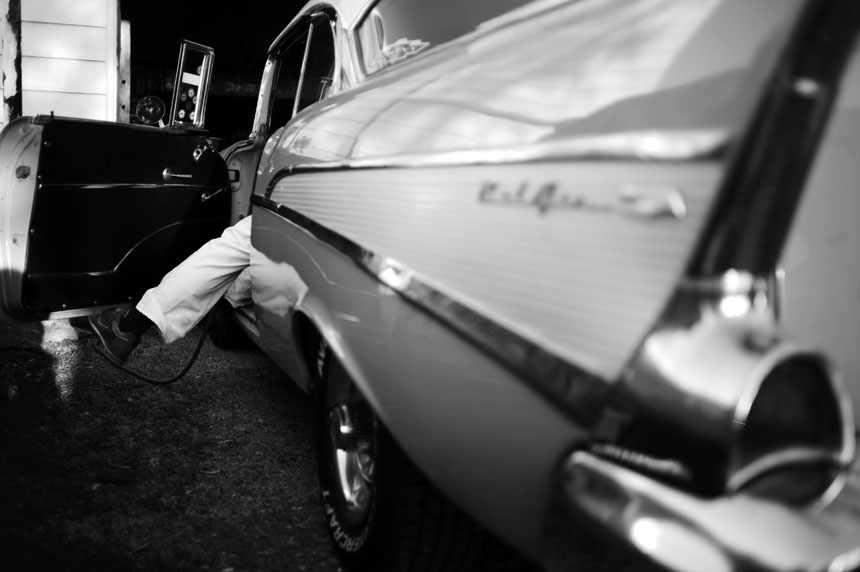 Tom Brosher dangles a leg outside of his 1957 Chevy Bel Air as he looks to cut a hole in the floor of the car for the shifter of his new 5-speed manual transmission on Thursday, May 6, 2010, in Dunkirk, Ind. Tom Brosher works on a shifter for a new 5-speed manual transmission inside of his 1957 Chevy Bel Air on Thursday, May 6, 2010, in Dunkirk, Ind.